Trans veteran tells MSNBC: Trump’s throwing us to the right-wing to ‘circumvent his own impeachment’ 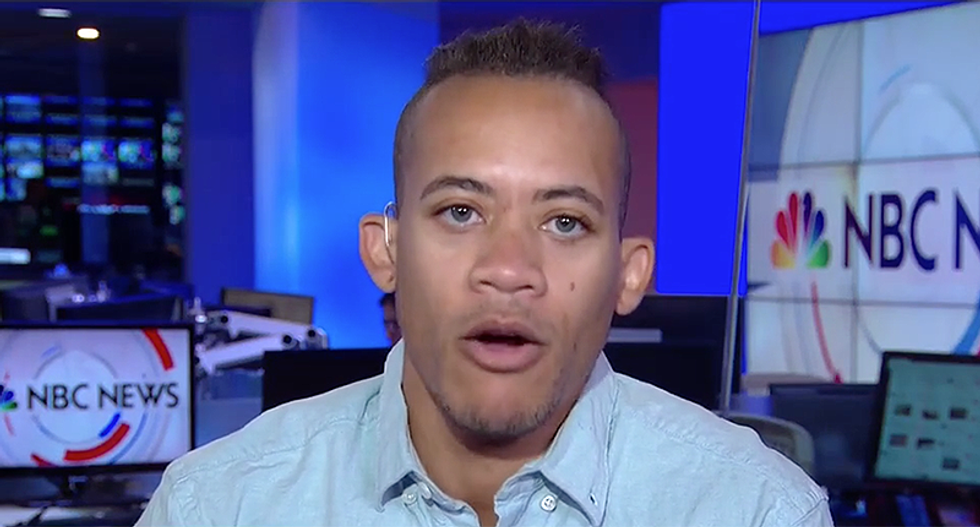 Retired Sgt. Shane Ortega is a transgender man who served as helicopter crew chief in the Army’s 25th Infantry Division and has been through three combat tours — two in Iraq, one in Afghanistan. He thinks President Donald Trump's recent policy decision to fire transgender military service members is all about deflection.

"This is a completely egotistical move on behalf of Donald Trump," Ortega told MSNBC. "I think he's honestly trying to circle the American people to deflect and detract the principles and goodwill of what it is to be an American service member. And he's trying to use them as pawns right now in order to invoke some sort of emotional reaction from the public to circumvent his own investigations that are going right now towards his impeachment."

Rep. Sean Patrick Maloney (D-NY) agreed with Ortega, noting that Trump's move goes further than even his own party wanted.

"The Republican-controlled House of Representatives, including 24 Republican members of Congress, just a few days ago, voted to preserve transgender equality in the military," Maloney recalled. "So, the president has now-departed even from the standard that the Republican controlled House had, which was to leave in place the ability of transgender members to serve honorably. Folks like Shane Ortega and Kristen Beck, a member of S.E.A.L. Team 6, deployed to Afghanistan and Iraq and Riley Dosh who recently graduated from West Point, being denied a commission for no reason when she passed all of the standards for graduation at West Point."

Maloney said that the country has invested in these soldiers and trans members have served honorably.He went on to call it unprofessional and discriminatory and foresees it going on the "ash heap" with everything else Trump stands for.

Ortega explained that being a trans individual involves a lot of suffering while learning to "live your life authentically." But when it comes to doing jobs like those that support "special operations" and other highly coveted positions in the military, it involves a lot of work.

"I had to be extremely well-trained and mature and level-headed in order to understand the capacity of that job," Ortega explained. "So, when President Trump tweets this, I have people still serving and friends still serving and they are trans military people and in Special Ops positions and other coveted positions. I'm entirely outraged and asking the American public to what degree and to what effort will you become outraged? What institution do we have to take where we take away the rights of these people who are literally sacrificing their very lives giving everything they have for you? And when are we going to start intervening and taking away this health care is a right we earned with our blood and sweat and time?"

He explained that service members give up their right to have a normal life and integrate into everyday society by entering the armed forces. Once out of the military, they can integrate back into social society like Ortega did last year.

"We give every ounce of everything we have to this country," he said. "And for Donald Trump to tweet this, I feel like this is the operation level of an elementary school child. We have 18-year-old kids who perform and behave better than the capacity of our Commander in Chief."