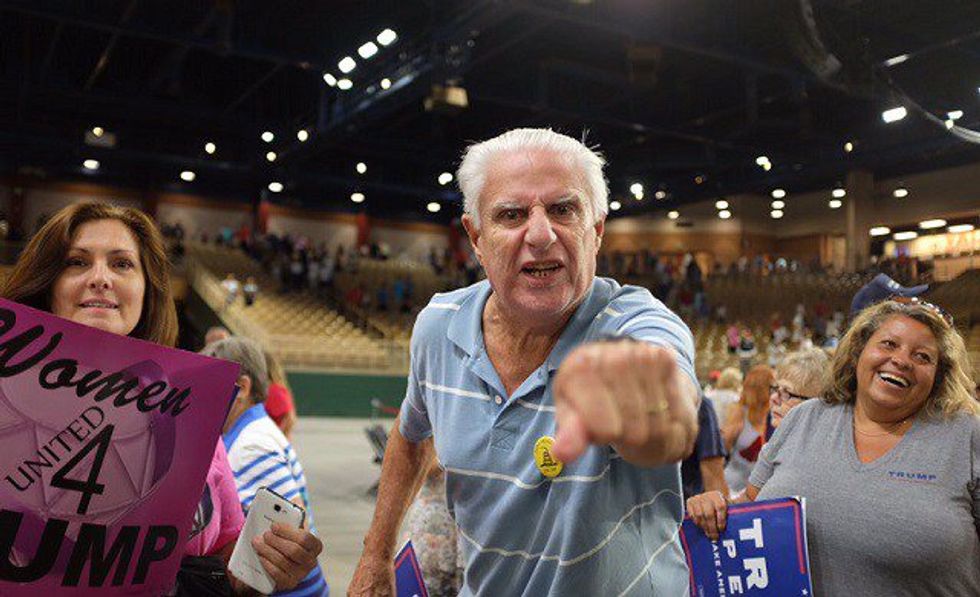 CNN came under fire late Tuesday after the Reddit user who claimed credit for the tweet by President Donald Trump issued an apology as well as other offensive things he’s posted online.

CNN’s Andrew Kaczynski explains the research the staff that led to his Facebook page. At no time did they publish the man’s identity as they deemed his apology was sincere.

However, it’s the line that appears next that has sent Trump supporters over the cliff and claiming blackmail and “doxing” -- a practice of revealing people’s private information publicly so physical attacks can be made. “CNN reserves the right to publish his identity should any of that change,” Kaczynski wrote.

"This line is being misinterpreted. It was intended only to mean we made no agreement w/the man about his identity," Kaczynski wrote on Twitter Tuesday night.

It was also reported that the man was 15 years old, which Kaczynski also revealed was not true.

"HanAs*holeSolo" reached out to Kaczynski via phone on Wednesday and issued the statement, "I am in total agreement with your statement. I was not threatened in anyway."

Other reporters seem in agreement that the Trump supporters are incorrect. John Podhoretz, the editor of Commentary and New York Post columnist was one.

"Sorry guys. It isn't doxxing [sic] to do clever research to uncover someone's anonymous identity and then keep him anonymous," he tweeted Tuesday.

"HanA**holeSolo" first shared the GIF and CNN determined that there was no other instance of the graphic being posted anywhere online before his posting. It was later edited and remade into a video with the sound added and that is when it was tweeted out by Trump on Sunday. "HanA**holeSolo" took credit for the tweet as well as other graphics posted on Reddit that CNN said were racist and anti-Semitic.

Once identified, "HanA**holeSolo" issued the apology, explaining that the practice of "trolling" is addictive. When Andrew Kaczynski of CNN's KFile was able to look through identifying information the man had online to ensure it was the correct person. They used a simple Facebook search and ultimately found the same person that had posted on Reddit. Only after CNN used the public information available to reach out to the man by phone on Tuesday did he post the apology and delete everything else he had ever posted.

"First of all, I would like to apologize to the members of the reddit community for getting this site and this sub embroiled in a controversy that should never have happened," he wrote on the subreddit /r/The_Donald. "I would also like to apologize for the posts made that were racist, bigoted, and anti-semitic. I am in no way this kind of person, I love and accept people of all walks of life and have done so for my entire life. I am not the person that the media portrays me to be in real life, I was trolling and posting things to get a reaction from the subs on reddit and never meant any of the hateful things I said in those posts. I would never support any kind of violence or actions against others simply for what they believe in, their religion, or the lifestyle they choose to have. Nor would I carry out any violence against anyone based upon that or support anyone who did."

He also apologized for appeals he has for violence against the press.

"The meme was created purely as satire, it was not meant to be a call to violence against CNN or any other news affiliation," he continued. "I had no idea anyone would take it and put sound to it and then have it put up on the President's Twitter feed. It was a prank, nothing more. What the President's feed showed was not the original post that was posted here, but loaded up somewhere else and sound added to it then sent out on Twitter. I thought it was the original post that was made and that is why I took credit for it. I have the highest respect for the journalist community and they put their lives on the line every day with the jobs that they do in reporting the news."

The apology was removed by the moderators of the subreddit.

"HanA**holeSolo" then returned the phone call to CNN's KFile to confirm his identity. According to Kaczynski, the man sounded nervous about his identity becoming public and asked not to be named out of fear for his safety and shame it would bring to his family.

CNN never published the man's name or information as a private citizen given that he issued an honest apology and promised never to do it again, Kaczynski explained.

After he posted the graphic he claimed he was "honored" to have his post "retweeted but [sic] the MAGA EMPORER himself!!!" He told CNN that the White House never contacted him about using the graphic and he admitted if they had he probably would have said no.

"I didn't realize that post would be picked up the way it was, he said. "I should have never even said anything."

The White House denies that the post came from Reddit and still refuses to answer questions from CNN about how the video ended up being tweeted by the president.

"I think they should have used their better judgment since the President tweets things off the cuff, it's a kneejerk reaction. I don't feel that they should have posted something like that given the controversy going on between them and the media," said "HanA**holeSolo" about his idol.

Trump hasn't issued an apology and Homeland Security Adviser Tom Bossert claimed "no one would perceive" the tweet as a threat during an appearance on ABC's "This Week."

However, the Committee to Protect Journalists released a statement saying that Trump's tweet "undermines the work of the media in the U.S. and makes it more dangerous." CNN said in a statement that the tweet "encourages violence against reporters."

"HanA**holeSolo" wanted it to be known that he actually "loves all people of all races, creeds and origins" and he has friends that are Jewish, Muslim and "a homosexual."

His apology encouraged others that "troll on the Internet for fun" to "consider your words and actions."

CNN issued their own statement about Trump's tweet, saying that his attack was "almost as painful as having to call him president."