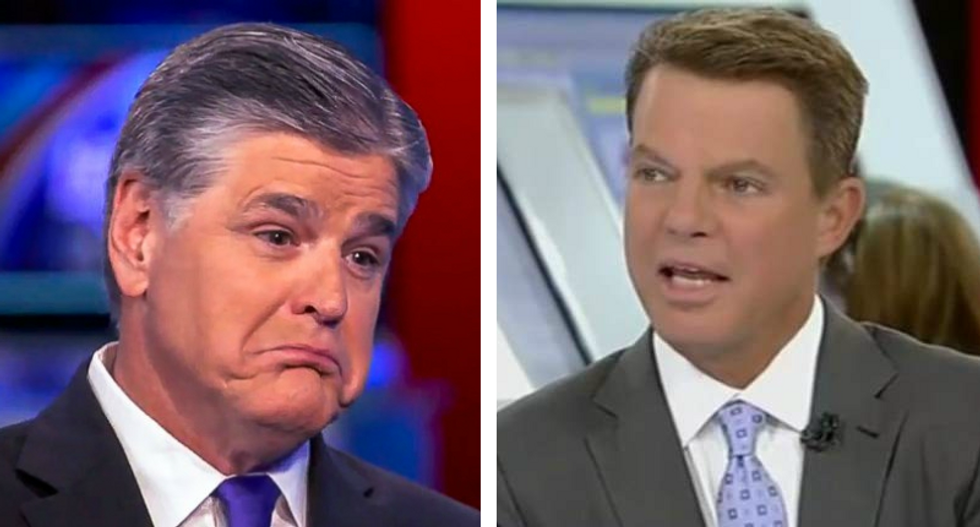 A Fox News host lashed out at the chief news anchor of Fox News in the growing internal battle at the network.

"I like Shep," Hannity said Monday. "But he's so anti-Trump. I mean, he went off on a rant last week."

"If there’s nothing there and that’s what they tell us, they tell us there’s nothing to this and nothing came of it, a nothing burger, it wasn’t memorable. Didn’t tell you about it because it wasn’t anything, so I didn’t even remember it with a Russian interpreter in the room at Trump Tower," Smith said Friday. "If all of that, why all of these lies? Why is it lie after lie after lie?"

"I'll say this about the Fox News Channel, there are voices on Fox that drive me nuts," Hannity admitted. "Like Shep and I been friends for years, we just respect we don't agree. And the media was praising Shep and he's not the biggest fan of Trump, fine!"

The extent to which Fox News personalities are fans of President Trump is tearing the network apart.

"Smith is a hard news anchor who is supposed to cover the news straight down the middle with no bias. Hannity is a conservative talk show host extremely supportive of Trump. Both have been with Fox News since its inception in 1996," CNN explained. "Hannity's comments about Smith highlight a deepening divide at Fox News between the network's news operation and its opinion hosts. Hard news anchors like Smith and Chris Wallace have expressed dismay in recent days with the news that has emerged from the Trump White House, particularly after emails revealed Donald Trump Jr. met with a Russian lawyer under the pretense she would provide 'very high level and sensitive information' that would 'incriminate' Hillary Clinton. Meanwhile, hosts like Hannity, Tucker Carlson, and Eric Bolling have sought to downplay such news, instead characterizing it as hysteria from the supposed liberal media."

In a further sign of the split at the conservative network, Fox News White House correspondent John Roberts left Tuesday’s press briefing in a huff, taking a shot at Sarah Huckabee Sanders.