WATCH: Buzz Aldrin floored as Trump humiliates himself attempting to talk about science and space 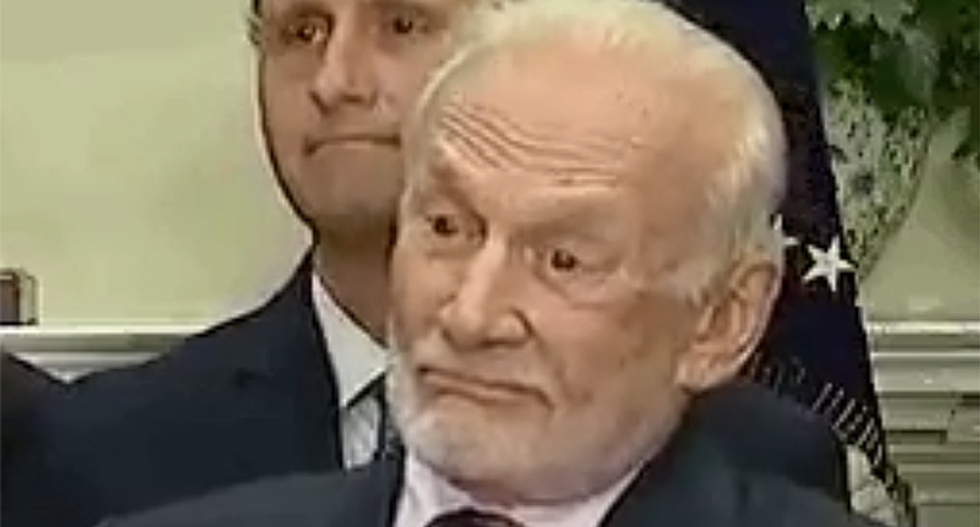 In an event at the White House this week, President Donald Trump reignited The National Space Council to help achieve his dream of landing a human on Mars within his first term.

The problem was not in reigniting the American strive to achieve planetary travel or even Trump's inability to understand Buzz Aldrin's "Toy Story" quote during his speech. The concern many found was that the president seemed to misunderstand what exactly "space" was.

"At some point in the future, we’re going to look back and say how did we do it without space?" Trump asked, as if "space" was one of the scientists on the team.

Aldrin's response was obvious and captured on camera.

This is a bit of Trump's remarks about space today during his E.O. signing. Just listen (and watch Buzz Aldrin's face). pic.twitter.com/hrUFAUpptX

Reading from his speech, Trump had a poignant comment about "discovery" and a journey that "will not only make us stronger and more prosperous but will unite us behind grand ambitions and bring us all closer together." But the moment was short-lived as Trump ad libbed, "Wouldn’t that be nice? Can you believe that space is going to do that?"

Trump then sat down at the table to sign the executive order. "I know what this is. Space!" he announced, enthusiastically.

Aldrin again seemed uncomfortable. "To infinity and beyond!" he joked, and those at the event chuckled.