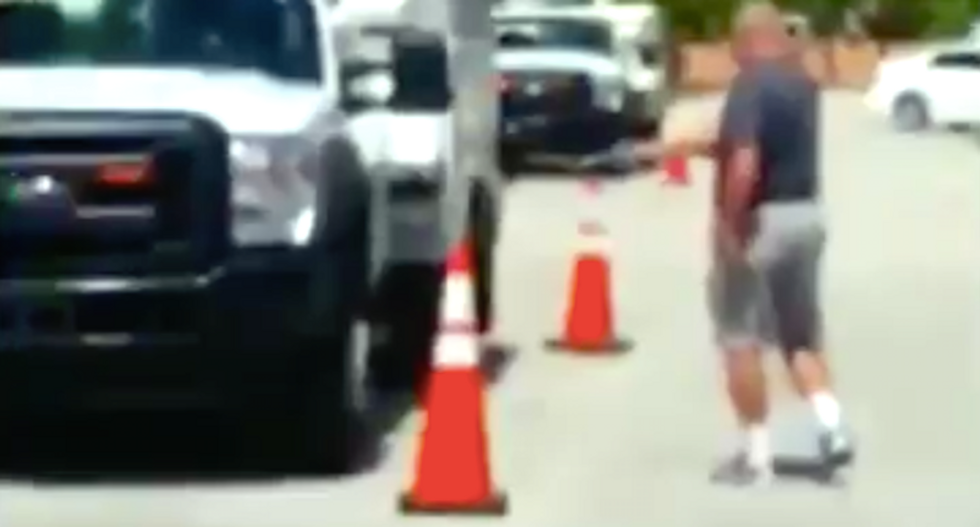 A retired Florida firefighter opened fire on utility trucks parked in front of his lawn after they ignored his orders to move.

A witness recorded video of Jorge Jove calmly walking around an AT&T truck about 11 a.m. Wednesday and firing gunshots at all four tires and the engine as panicked workers called 911 for help, reported the Miami Herald.

“He's shooting the truck right now,” said a worker, who identified himself to dispatchers as Derrick Taylor. “There's a guy shooting the tires and shooting the engines and everything.”

The 64-year-old Jove then walked over to the second truck and started shooting, and even reloaded his gun several times.

“Someone’s up in the bucket truck and he can’t come down because he’s shooting the truck,” Taylor told the 911 dispatcher.

Police arrived and questioned Jove, who said he was angry the trucks were parked in front of his driveway.

“He flattened their tires, he shot into the bodies of the trucks, he shot at one of the radiators of the trucks,” said Sgt. Carl Zogby, of Hialeah police. “We’re trying to determine now whether he was actually intentionally trying to shoot the workers or just shoot the vehicles.”

The workers told Jove they would move the vehicle within minutes, after they finished their repairs, but that didn't satisfy the homeowner.

A neighbor, who described Jove as "an impeccable man," told WSVN-TV that the retired firefighter had previously exchanged words with utility workers making the same repairs in front of his driveway.

Jove was taken into custody for questioning, and police said charges were pending.

WILD video - WATCH as #Hialeah Police say 64y/o man shot at 2 @ATT trucks outside his home. All caught on camera. No one hurt. @wsvn pic.twitter.com/to9WjUD1kL

'Invasion': Texas Lt. Gov. likens border crossings to attack on Pearl Harbor – 'These people are a danger to America'

Lt. Governor Dan Patrick, a far-right Republican, is comparing migrants crossing the border into Texas to Japan's 1941 attack on Pearl Harbor that killed 2335 people. He is calling it an "invasion" and says that gives the state the right to "put hands on people."

On Twitter Sunday afternoon in the aftermath of the July 4th Highland Park mass shooting a photo of a young boy appeared in several tweets. He was described as lost, good samaritans assumed he had become separated from his parents in the mayhem of the massacre, and people were trying to reunite him with his family.

CBS Chicago reporter Marissa Parra now reveals the boy's name is Aiden, but he won't be reunited with his parents: both were shot dead by the Highland Park gunman.

US President Joe Biden has read a letter from Brittney Griner, the women's basketball star who has been detained in Russia since February, and freeing her is a "priority," the White House said Tuesday.

Griner's family had on Monday released portions of her handwritten letter to Biden, in which the WNBA star implores the president to "do all you can" to win her release.