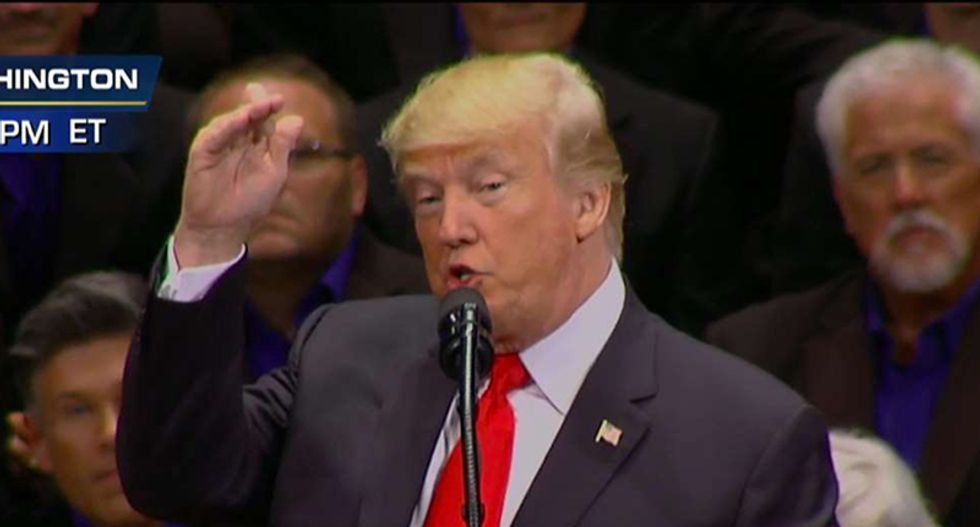 President Donald Trump spent an extra $400,000 of taxpayer dollars to fly from Washington, D.C. to his resort in New Jersey then back to Washington again for "the first ever Freedom Rally" at the Kennedy Center Saturday. During his speech, Trump decided "freedom" meant celebrating Christmas in July.

Trump began his speech by attacking the media and touting his election win, as he is known to do.

He went on to involved the memory of Benjamin Franklin and noted that at the Constitutional Convention, Franklin reminded his fellow delegates to "bow their head in prayer. I remind you, we're going to start saying Merry Christmas again."

While Franklin was a devout believer in a creator, he wrote to Ezra Stiles that he doubted "the divinity of Jesus of Nazareth," but admitted he hadn't studied it and had no real intention of doing so. To Franklin, "Religion was worthless unless it promoted virtuous behavior." Virtuous isn't exactly an adjective Franklin or anyone might use to describe Trump.

The comments came after Trump asked veterans to stand for recognition. he told the veterans that he was "handed a mess, believe me," alluding to the previous administration. Trump has pledged to fix the Veterans Administration but this far he's only signed an executive order that allows federal employees to be fired more easily.

"My administration will always support and defend your religious liberty. As long as I am President, no one is going to stop you from practicing your faith or from preaching what is in your heart," Trump continued.

Trump closed his speech to encouraging chants and assured supporters, "For those that are curious, we will build the wall."