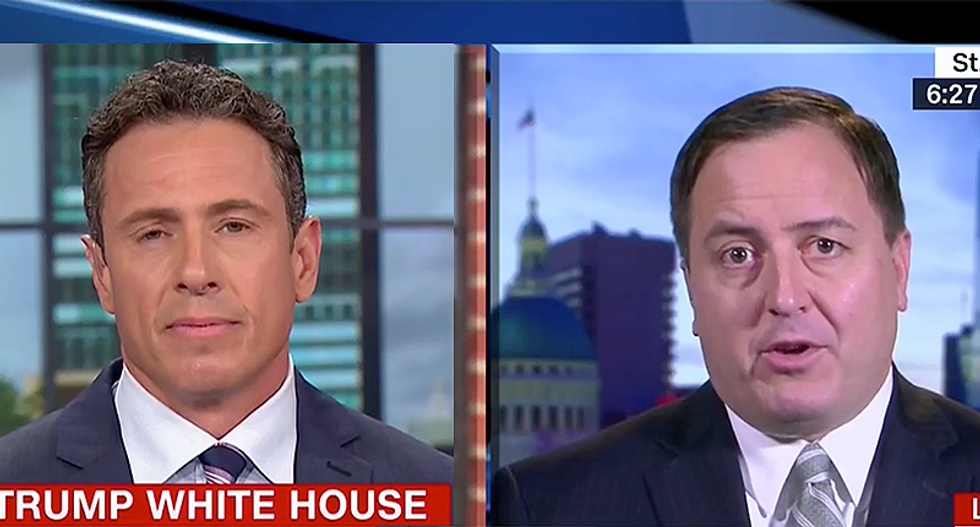 Missouri Secretary of State Jay Ashcroft is one of very few leaders to agree to the request by President Donald Trump's commission on voter fraud. CNN's Chris Cuomo hammered the conservative Republican about the false claim that 3 million people voted illegally.

Ashcroft, who is the son of former Attorney General to George W. Bush John Ashcroft, argued his state "regularly" sees voter fraud cases. The statement is in direct contrast with the previous Secretary of State Jason Kander, who said his office did the most in-depth investigation into voter fraud the state has ever seen and found nothing.

"There's very little that the federal government could do and as you know, when you've gone around the state making the case for your efforts, you really only have one case that you can cite and that doesn't mean you shouldn't try to do better, but it does mean you shouldn't blow the problem out of proportion," Cuomo said. "The president said there were 3 million illegal votes. There's absolutely zero proof of that. Why waste time and money with a commission to look at fraud when you don't have a major fraud issue?"

Ashcroft argued he has more than one case in the last six months. Missouri is also a state that requires voter I.D., which Cuomo recalled is headed to the Supreme Court to weigh in.

"But if that's all you want, is to make sure that you have the most full participation in the fairest election you wouldn't be doing this, you would be doing all you can to encourage all the eligible voters you have to vote but you're not doing that?" Cuomo asked

Ashcroft attempted to justify turning over the data by saying that it is well-known voter fraud occurs.

"But it happens on a very small scale," Cuomo cut in. "There must be a list of priorities for you to take on as Secretary of State than voter fraud?"

"I think the people appointed me or elected me to do that and I'm going to do that," Ashcroft continued. "But I also think that any time elections are changed based on voter fraud that's a problem. We've had that occur in Missouri. It's been demonstrated. Secondly, I think we can both agree whether or not there is vote fraud, what amount it occurs in, has been something where there are smart, good people on both sides of the disagreement.

Cuomo cut in saying that he doesn't accept the premise.

"This is not a 50/50 proposition where maybe it's 3 million, maybe it isn't," he said. "There are no numbers anywhere like that coming from anywhere that deserves respect, except the president's mouth. He owned this as an explanation for the popular vote results and other than that, we know the studies, be you know them, you can't substantiate the allegation with anything than the president's own words."

Ashcroft said that he was glad that Cuomo agreed there is a such thing as voter fraud. "That's an improvement," he said sarcastically. "I would say is if like you, you believe that vote fraud isn't a massive thing, it doesn't change the elections, shouldn't you want there to be by a bipartisan commission like this with full information, because if the data shows that you can stand up and say I was right. And I would think that Republicans would like to have a bipartisan investigation with all the information, why don't we do this well and put this to rest?"

Maryland Attorney General Brian Frost later told CNN that a few cases of voter fraud are not enough to expose the personal information of millions of Americans. "I think they ought to focus on real problems. They should stop wasting taxpayer money and engaging in this massive effort that is designed only to stop people from voting rather than encouraging them to vote. That's what democracy is about. We want people to participate. This goes the wrong way."