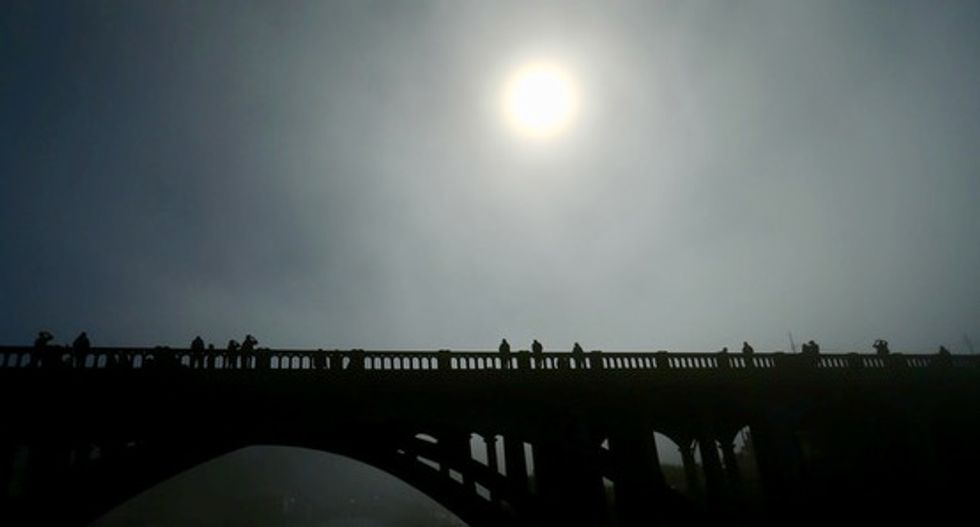 The moon blacked out the sun on Monday as the first coast-to-coast total solar eclipse in the United States in nearly a century began in western Oregon, while millions of Americans looked skyward in wonder through protective glasses, telescopes and cameras.

After weeks of anticipation, the sight of the moon's silhouette passing directly in front of the sun, blotting out all but a halo-like solar corona, drew whoops and cheers from onlookers gathered in Depoe Bay, Oregon. The rare cosmic event was expected to draw one of the largest audiences in human history, including those watching through broadcast and social media.

At Roshambo ArtFarm in Sheridan, Oregon, people aimed their cameras at the sky as the moon slowly ate its way across the midday sun, causing the air to cool.

"I'm really lucky we got to be here today," said Jason Davis, 29, who got married on Saturday and decided to stop in Oregon for the eclipse. "It's pretty cool. I'm sort of surprised by the temperature change."

The eclipse first reached totality in Oregon at 10:15 a.m. PDT (1715 GMT) and began marching slowly eastward across the country. The phenomenon will take its final bow at 2:49 p.m. EDT (1849 GMT) near Charleston, South Carolina, where eclipse gazers gathered atop the harbor's sea wall.

Nancy Conway, 57, an elementary school principal, said she and her family made the drive from Lynn, Massachusetts.

A number of towns within the total eclipse's path set up viewing parties. At the Southern Illinois University campus in Carbondale, Illinois, the 15,000-seat football stadium was sold out for Monday.

"I woke up at 4 a.m. so I'm excited," said Madeline Rubin, 17, who drove two hours to the stadium with others wearing T-shirts that said "I totally blacked out."

The last time such a spectacle unfolded from the Pacific to the Atlantic was in 1918. The last total eclipse seen anywhere in the United States took place in 1979.

For millions of others outside the zone of "totality," a partial eclipse of the sun will appear throughout North America, a spectacle that was expected to draw its own crowds.

In Washington, D.C., hundreds of people waited in long lines outside the National Air and Space Museum, which was distributing more than 20,000 pairs of free viewing glasses. Residents of the nation's capital will see 81 percent of the sun obscured at the eclipse's peak around 2:24 p.m.

Daniel Berger, 33, a software developer from New York, said he has been waiting with his wife and their two children for almost an hour.

"This is a far larger crowd than I anticipated," he said. "It's the first non-political attraction for D.C. in many years, so that's nice."

Perhaps never before have so many people had the opportunity to see a total eclipse, said cartographer Michael Zeiler, who maintains the www.greatamericaneclipse.com website and is a self-described "eclipse chaser" who on Monday will mark his ninth time seeing "totality."

Zeiler estimated up to 7.4 million people traveled to the zone to observe the total eclipse, which is taking place in the peak vacation month of August.

Many people trekked to remote national forests and parks of Oregon, Idaho and Wyoming. Those who live along the path, which cuts through a few population centers like Kansas City, Missouri, and Nashville, Tennessee, can simply walk out their homes and look skyward.

For those who live too far from the shadow's path or cannot escape the indoors, a NASA-linked website, eclipse.stream.live, and a companion mobile app provided a live stream filmed from the vantage point of 50 helium-filled balloons at a height of 80,000 feet (24,384 meters).

The sun's disappearing act is just part of the show. As the black orb of the moon nibbles away at the sun's face, the heavens dim to a quasi-twilight and some stars and planets will be visible.

The last glimmer of sun gives way to a momentary sparkle known as the "diamond ring" effect just before the sun slips completely behind the moon, leaving only the aura of its outer atmosphere, or corona, visible.

The corona, lasting just two minutes, marks the peak phase of totality and the only stage of the eclipse safe to view with the naked eye.

For a graphic on solar eclipse in 2017, click: http://fingfx.thomsonreuters.com/gfx/rngs/SOLAR-ECLIPSE/010050FD109/solar-eclipse.jpg