Amid Trump backlash, Nikki Haley demands the world stand up and isolate hate 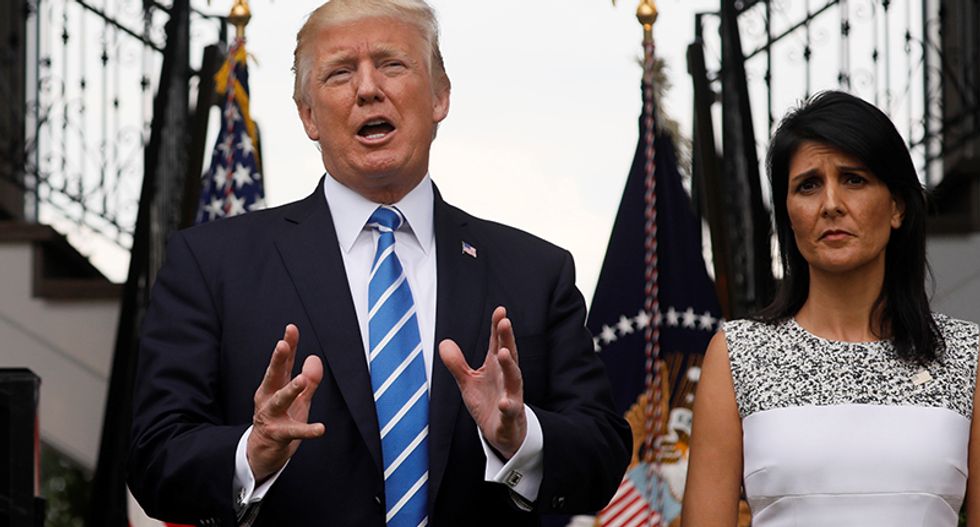 U.S. Ambassador to the United Nations Nikki Haley told staff in an email - seen by Reuters on Friday - that everyone must stand up and condemn hate, as President Donald Trump faces a backlash for his response to violence at a protest by white nationalists.

Trump blamed both sides for clashes in the southern college town of Charlottesville in Virginia last weekend, where white nationalists were protesting the removal of a statue of Confederate General Robert E. Lee. A woman was killed when a suspected white nationalist plowed his car into a crowd.

"Those who march spewing hate are few, but loud. We must denounce them at every turn, and make them feel like they are on an island and isolate them the same way they wish to isolate others," wrote Haley, a member of Trump's cabinet, in the email sent Thursday to staff at the U.S. mission to the United Nations.

Haley, a former governor of South Carolina, said the "horrible acts" seen in Charlottesville "took me back to sad days dealing with the Charleston tragedy in 2015."

Haley attracted national attention when she secured the removal of the Confederate battle flag from South Carolina's capitol grounds after a white supremacist killed nine black churchgoers in Charleston.

"People aren't born with hate. We all have a responsibility to stand up and condemn it," Haley wrote in the email to staff, which did not refer to Trump.

Trump has alienated Republicans, corporate leaders and U.S. allies, rattled markets and prompted speculation about possible White House resignations with his comments since the violence in Charlottesville.

On Monday, Trump bowed to political pressure and denounced neo-Nazis and the Ku Klux Klan by name, but on Tuesday he again inflamed tensions by insisting counter-protesters were also to blame and that there were "very fine people" among both groups.

United Nations Secretary General Antonio Guterres in a Twitter post on Tuesday said that racism, xenophobia, anti-Semitism and Islamophobia were "poisoning our societies," adding: "We must stand up against them. Every time. Everywhere."