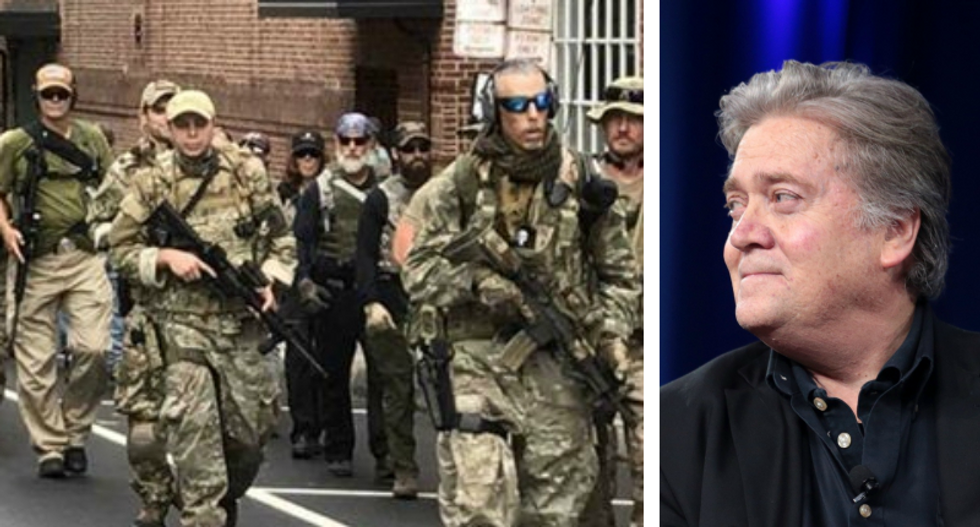 "Steve was proud of how [Trump] stood up to the braying mob of reporters" at President Trump's circus-like press conference, Axios reports.

"Bannon saw Trump's now-infamous Tuesday afternoon press conference not as the lowest point in his presidency, but as a 'defining moment,' where Trump decided to fully abandon the 'globalists' and side with 'his people," Axios explained.

Before joining the Trump campaign, Bannon was chief executive at Breitbart.com, which he described as a "platform" for the so-called Alt-Right.

"Both Trump and Bannon are of one mind, and, within the White House at least, theirs is a minority view. They saw the backlash to Charlottesville as an example of political correctness run amok and instinctively searched for 'their' people in that group of protesters," Axios said. "Bannon has told associates that Trump, on Tuesday afternoon, took it to the next level for the country by asking where does it end?"

Axios says Bannon spoke by phone with the president daily during the days when Trump was criticized for refusing to condemn the white supremacists who marched on Charlottesville.

For weeks, there have been calls to fire Bannon from both sides of the party and the strain may be making the chief strategist paranoid.

"There’s a good reason that white nationalists rejoice at Steve Bannon’s proximity to power. There’s a good reason that countless Americans look at that man so close to the Oval Office and fear his influence on their president’s mind and heart," the National Review noted. "How can Trump look the American people in the face and say that he unequivocally condemns the alt-right when one of the men who did more than anyone else to enhance its influence works down the hall?"

“He actually gets very unfair press in that regard, “Trump said. “He’s a good person and I think the press treats him frankly very unfairly.”