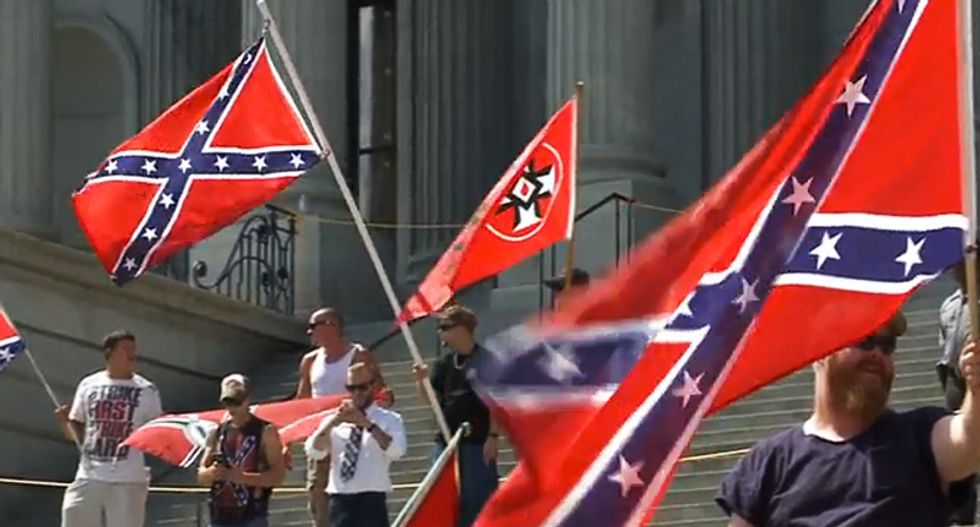 A Texas television station investigating white supremacist hate in their region was startled to discover a website linked to the newly-appointed Colbert, Oklahoma police chief.

It started with all of the attention the Southern Poverty Law Center's "Hate Map" received following the violence in Charlottesville, VA.

Reporter Rachel Knapp of KXII noticed a single hategroup in the Texoma region and began investigating. The website -- ISD Records -- had filed paperwork in 2004 with the signature of Bart Alsbrook.

A Bart Asbrook was hired as Colbert's interim Police Chief -- just last week. Asbrook is the third Chief hired so far this year.

"We called Alsbrook about that application last week. He denied he was the Bart Alsbrook behind isdrecords.com," KXII reported. "We searched for another Bart Alsbrook and couldn't find another person with that name in the United States."

Alsbrook's initial denial was suspect after the site was taken offline "within hours" of the reporter's questioning.

"When we called him back to ask him about it, Alsbrook claimed a group of skinheads stole his wallet and began using his name after a fight at a heavy metal concert in the 1990's," KXII reported.

KXII noted that Alsbrook was once charged with attempted murder, but the charge was later dropped. Alsbrook is currently only certified as a reserve officer, which means he will be required to earn his peace officer certification within six months.

In 2005, SPLC revealed that "Blood & Honour USA's Texas coordinator Bart Alsbrook" had traveled to Ohio for "Blood and Honour" meetings with "skinhead groups from at least eight states.

ISD records sells "Combat 18" patches, which are associated with the "Blood and Honour" skinhead movement. The '18' in the name is derived from the initials of Adolf Hitler.

"Throughout the 1990's Combat 18 was associated with acts of terrorism and violence including arson attacks," the BBC reported.

Other items sold include a Blood & Honour patch along with Hitler Youth, KKK, SS, swastika and confederate flags.

Music includes "Hitler was Right" and "Start up the Panzers."

'He knows that this is all a lie': Trump insider claims ex-president told him he's 'playacting'

As part of a New York Times analysis on the impact that the Jan 6th hearings are on having on those who are skeptical that Donald Trump will be held to account for the Capitol riot that sent lawmakers fleeing, one Donald Trump insider is claiming that the former president knew fully well that he had lost the 2020 election and that he has been playing a part.

As the Times' Baker wrote, "For a year and a half, Mr. Trump has been shielded by obfuscations and mischaracterizations, benefiting from uncertainty about what he was thinking on Jan. 6, 2021," before adding, "But for a man who famously avoids leaving emails or other trails of evidence of his unspoken motives, any doubts about what was really going through Mr. Trump’s mind on that day of violence seemed to have been eviscerated by testimony presented in recent weeks by the House committee investigating the Capitol attack."

Congresswoman Liz Cheney, a rising Republican star until she refused to accept Donald Trump's false claims of a stolen election, says she has not ruled out a US presidential run in 2024.

"I'll make a decision about '24 down the road," she said in an interview Sunday with ABC talk show "This Week."

Amazon founder Jeff Bezos has criticized President Joe Biden for calling on oil companies to lower sky-high gasoline prices, prompting the White House to come to the US leader's defense on Sunday.

"My message to the companies running gas stations and setting prices at the pump is simple: this is a time of war and global peril," Biden tweeted Saturday.