Charlottesville Godd*mn: Trump’s refusal to condemn his backing from white supremacists is appalling 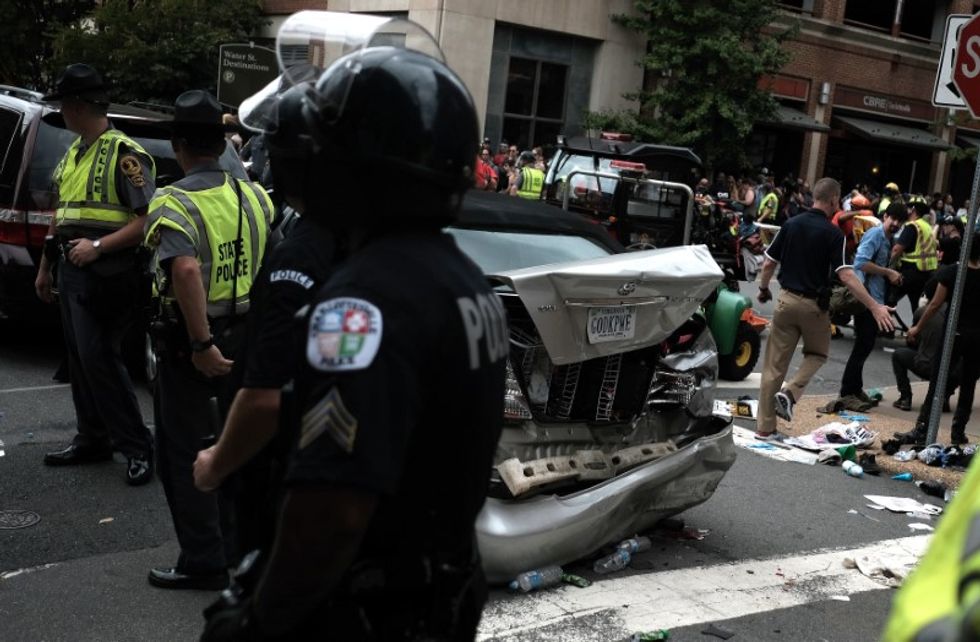 First responders stand by a car that was struck when a car drove through a group of counter protesters at the "Unite the Right" rally Charlottesville, Virginia, U.S., August 12, 2017. REUTERS/Justin Ide
Enough.
We have a president who is emotionally challenged and empathy-free, who on Saturday read from a prepared statement of concern and condemnation, incapable of speaking genuinely from the heart, apparently because he knows that those who speak racist hate and commit acts of deadly violence are a portion of his “base.”
Witness Ku Kluxer David Duke declaring in Charlottesville, Virginia, beforeSaturday's violence, “We are determined to take our country back. We are going to fulfill the promises of Donald Trump. That’s what we believed in, that’s why we voted for Donald Trump. Because he said he’s going to take our country back.”
It’s true that you can’t always choose those who want to march in support of you, although Trump’s refusal to condemn his backing from white supremacists is appalling. Nor can it be denied that on the extreme left there are a few, like so many on the extreme right, who see violence as a means to an end. But Trump not only has failed to speak out against white nationalists, he allows them to work in his White House and mutter seditious nonsense into his all-too-susceptible ears.
As he spoke on Saturday afternoon he was unable to out-and-out condemn the neo-Nazis in Charlottesville without diluting his censure, saying there was “hatred, bigotry and violence” but adding “on many sides, on many sides.” And then he tweeted, “Condolences to the family of the young woman killed today, and best regards to all of those injured, in Charlottesville, Virginia. So sad!”
Best regards? So sad? So lame. A woman died, a paralegal named Heather Heyer, and others were wounded at the hand of what appears to be a racist murderer using a car as a deadly weapon. This is a national tragedy, Mr. President. It is domestic terrorism and your reaction must be one of outrage, not left-handed sympathy.
On Saturday, Trump said, "It's been going on for a long time in our country. Not Donald Trump. Not Barack Obama. It's been going on for a long, long time.” He’s right about the long, long time part but as Richard Cohen, president of the Southern Poverty Law Center (SPLC) wrote on Saturday:
“[F]rom the day he came down the escalator in the tower that bears his name, Trump consciously poured fuel on the fire. He ran a racist, xenophobic campaign that energized the radical right… Trump calls for the country to unite. But he is still ducking responsibility for his role in dividing it.”
Many Republican senators denounced Saturday’s fascist extremists more strongly and explicitly than the president, including Colorado’s Cory Gardner, who tweeted, “Mr. President - we must call evil by its name. These were white supremacists and this was domestic terrorism.”
But in the not-so-distant past, out of fear of alienating some conservative voters, Republicans have condemned groups like the SPLC for calling out the growing threat of the extreme right and white supremacy, just as those Republicans so vehemently attacked a 2009 report from the Department of Homeland Security on rightwing domestic terrorism that it was withdrawn from circulation. That analysis found that every year, with the exception of 2001 and the 9/11 attacks, right wing extremism was responsible for more violence in the United States than radical Islamic terrorism.
The report’s findings were backed up by an FBI analysis last year that hate crimes were up and by a 2015 survey conducted with the Police Executive Research Forum. Two of those involved, Charles Kurzman of the University of North Carolina and David Schanzer of Duke University, wrote in The New York Times, “The main terrorist threat in the United States is not from violent Muslim extremists, but from right-wing extremists…
“An officer from a large metropolitan area said that ‘militias, neo-Nazis and sovereign citizens’ are the biggest threat we face in regard to extremism,” they wrote. “One officer explained that he ranked the right-wing threat higher because ‘it is an emerging threat that we don’t have as good of a grip on, even with our intelligence unit, as we do with the Al Shabab/Al Qaeda issue, which we have been dealing with for some time.’”
President Trump, you reap what you sow and boilerplate statements of sorrow ring hollow. Presidents are supposed to bring us together. Your predecessors, Republicans and Democrats, have done so with grace. But this president says he loves all Americans while working to deprive them of their freedoms. And keeps within his circle of advisors those for whom hate is an asset and not a dagger to the heart of democracy.
Fire Sebastian Gorka, the bogus security advisor who earlier this week told Breitbart News Daily that white supremacists are not a problem. Fire Stephen Miller, who seems to think the Statue of Liberty is more a symbol of exclusion than welcome. And fire Steve Bannon and his off-the-wall, destructive theories of white nationalism.
Their dismissals would be a start. But on Saturday, we saw into your soul, Donald Trump. And there was nothing there.
#####
Michael Winship is the Emmy Award-winning senior writer of Moyers & Company and BillMoyers.com. Follow him on Twitter: @MichaelWinship.
Opinion
Report typos and corrections to: corrections@rawstory.com.
Like this article ? Text `Support` to 50123 to donate.
READ COMMENTS - JOIN THE DISCUSSION