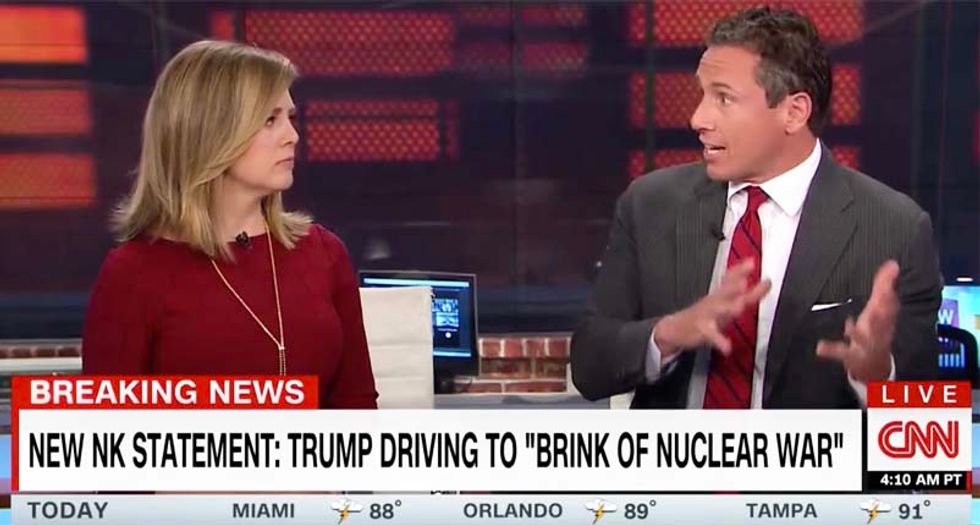 Responding to continuing sabre-rattling between North Korean strongman Kim Jong-Un and a blustery President Donald Trump, a CNN panel worried that under the president plans to combat North Korea are being made up moment to moment based on Trump's tweets and rhetoric.

Speaking with host Chris Cuomo, CNN contributor Jon Avlon worried that every time Trump ramps up his "reckless" threats against North Korea the White House and the Pentagon have to scramble to make policy fit the words of the president.

"I think the Trump administration and the national security team deserves credit for trying to not have strategic patience and instead really confront this problem with a sense of urgency because we've gotten to the place where a nuclear armed ICBM could threaten an American city," Avlon explained. "The problem is the president, by ratcheting up the rhetoric to a reckless level -- to a point where it almost sounds like an echo chamber with the kind of North Korean rhetoric we have come to expect where it is unhinged to the point of parody -- it creates a real danger for the world."

"The problem is we consistently see strategy being made around the president's reckless comments, not having to t be a vehicle for strategy," he added.

"The policy is dealing with the new reality of a nuclearized North Korea," CNN contributor Chris Cillizza remarked. "The rhetoric and what he says and how he provokes purposely, I think doesn't necessarily mesh with the policy. But then the policy has to be bent to fit somewhere in the same universe as the rhetoric. This happens a lot with him, it's not just North Korea, but it does make it difficult to sort of marry those two."