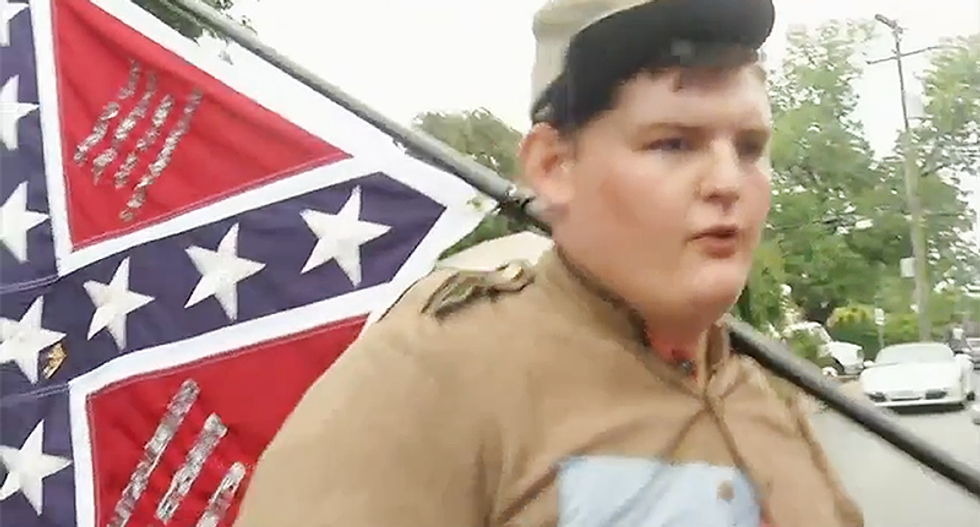 Allen Armentrout of Pensacola, Florida was kicked out of school after he wore a Confederate uniform to Charlottesville, Virginia.

Video footage revealed Armentrout dressed in the uniform, carrying a Confederate flag and saluting a statue of Robert E. Lee, according to the Pensacola News Journal. A crowd surrounded chanting "terrorist go home" as he stood motionless.

He told the paper that he wanted to make the trip to Virginia because he wanted to take back the history of his ancestors he felt the KKK and Nazis were misinterpreting. He said he hoped to share "the true history" of the South and push back against Neo-Nazis he feels have wrongly "latched on" to Confederate history.

"I went up there to represent what I believe is right," he told the News Journal.

In an Associated Press video, Armentrout said "they need to know what they fought for wasn't slavery or oppression."

Armentrout was told that his final year of enrollment at Pensacola Christian College was being terminated.

"I have been released from my school and will be unable to return to college to finish my senior year," Armentrout told WXII in an interview. "I'm processing this and making adjustments to my life to compensate for this scrutiny."

"Pensacola Christian College recognizes the dignity and value of all people, and we respect the history of America," the school said in a statement. "We encourage individuals to exercise discernment and seek to build reconciliation, especially during a time of mourning like Charlottesville is experiencing."

A photo of a protester went viral over the weekend with many defending Armentrout saying the woman was flipping him off for being overweight or for being a nerd. Since she was shouting "terrorist go home," the anger seemed more directed at the uniform and flag.

My Dearest Clara, Spaghetti night twas a disaster as I must now resign to wearing my confederate uniform over my st… https://t.co/8IASQBVeWs
— Mr. Awesome (@Mr. Awesome) 1503239964.0