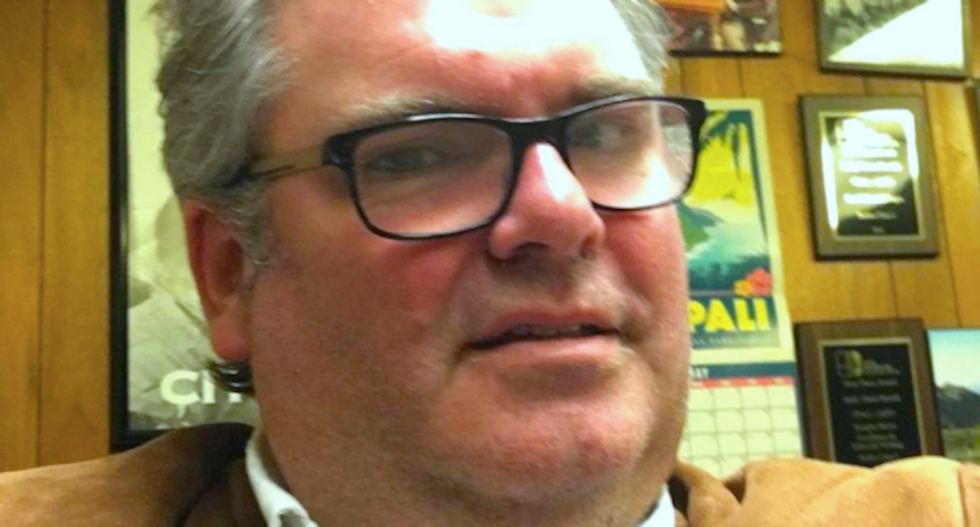 An Iowa newspaper columnist tried to trip up a Democratic congressional candidate with a thought exercise on punching pregnant women.

J.D. Scholten, a former minor-league baseball player from Sioux City, is running a Democratic primary campaign in hopes of challenging Rep. Steve King (R-IA), an eight-term incumbent who has become even more outspokenly racist since the election of President Donald Trump.

Douglas Burns, a columnist and co-owner of the Daily Times Herald, asked the pro-choice Scholten to describe in detail his views on abortion -- including whether he could name any circumstances where the procedure should be prohibited.

“I find that tough to answer because the late-term abortions tend to be medical, like there’s something that was dangerous to the child or to the mother,” Scholten told the newspaper.

The columnist asked Scholten to identify when life began, and the former baseball player and paralegal admitted he wasn't qualified to answer.

That's when Burns cooked up a bizarre scenario for Scholten to consider.

"OK, let’s put it another way," Burns wrote. "If there were a pregnant woman in here right now, and I punched her in the stomach, would your response be, 'Oh my God, you damaged her fetus!' — or would you be thinking, 'Wow! He just killed a baby.'"

Scholten said he would probably think of the fetus, and Burns continued his thought exercise.

"So when you see a woman who is clearly showing, you don’t see a baby, you see a fetus?" Burns wrote.

Scholten agreed that's what he would likely think, but then pointed out the horrifying absurdity of the exercise.

“"First of all, my initial reaction would probably be to punch you, to be honest," Scholten said. "But I’m not a violent person, just (so) you know — to be clear. The thing is, I’m not a medical doctor. So I don’t know when a child can survive and not survive."

Scholten again conceded he didn't have a definitive answer for Burns' question, but said that uncertainty informed his own views on abortion.

“Right, but what I do have a firm belief is that the government shouldn’t be in the doctor’s office and stand between the woman and the doctor," Scholten said.

Burns posed similar questions to another Democratic candidate, Leann Jacobsen, a Spencer City councilwoman and owner of a coffee shop and wine bar, but she refused to play along.

"I would have to really look," Jacobsen said in response to Burns question on possible abortion limits. "I don’t have an answer to what you’re asking."

Burns went on to praise King's "unbending" views on abortion, without quoting the GOP lawmaker, but outlined his own belief that abortion should be considered criminal murder in all instances.

"My take is that the rape exemption has no place in the debate," Burns wrote. "Motivation doesn’t matter. A baby is a baby or a fetus is a fetus. Just as children of illegal immigrants had no say in their residency in Texas, the life forms inside of pregnant women weren’t consulted before the act."

Burns has not yet responded to a request for comment.