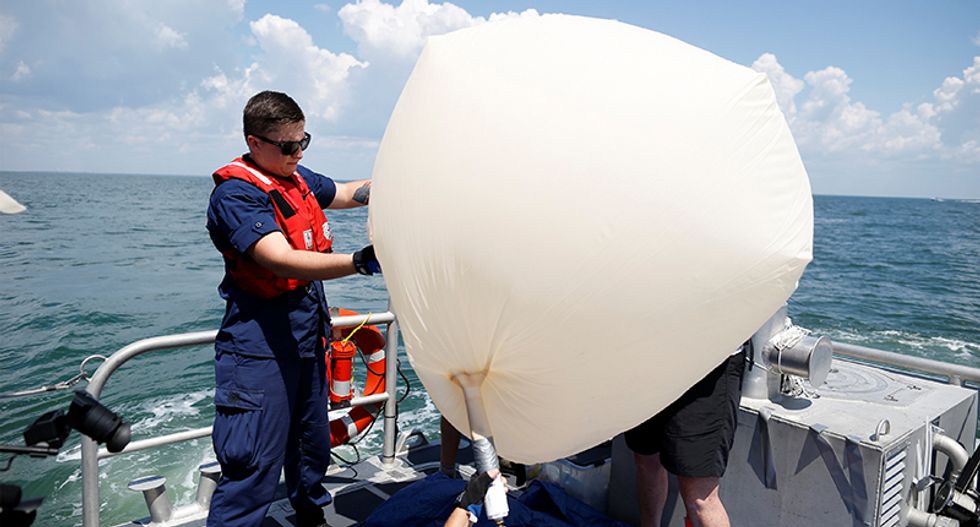 US Coast Guard fireman Justin Spurlin (L) helps hold a balloon during a test launch for the Space Grant Ballooning Project in preparations for Monday's solar eclipse on board a US Coast Guard response boat at sea near Charleston, South Carolina, U.S. August 17, 2017. Location coordinates for this image are 32º41' 975" N 79º44'195" W. REUTERS/Randall Hill

Next week's solar eclipse will be streamed live online for the first time, from the vantage point of helium-filled balloons across the United States, providing the public with sky-high views as the moon blocks the sun.

A team of researchers from Montana State University has partnered with NASA to participate in the Space Grant Ballooning Project to send more than 50 high-altitude balloons 80,000 feet (24,384 meters) up to capture the solar eclipse as it crosses the country on Aug. 21.

"We'll see the variations from coast to coast to see what the eclipse does over landscapes," Cassandra Runyon, director of the South Carolina Space Grant Consortium, said excitedly at a test launch on Thursday.

During the eclipse, the moon will pass between the sun and Earth from west to east, and cast a shadow on Earth.

On the east coast of Charleston, South Carolina, the last location in the continental United States over which the eclipse will pass, Runyon and her team of professors and students will launch balloons from a U.S. Coast Guard boat five to six nautical miles (9 km to 11 km) offshore.

The latex balloons, which are roughly 9 feet (2.7 m) tall when filled with helium, will be equipped with high-definition video cameras, still cameras and computers. They will be launched from roughly 50 U.S. locations and transmit the images back to Earth.

The balloons will be filled with enough helium to lift them roughly 1,000 feet per minute reaching an altitude of 80,000 feet.

"I think it's very powerful to have that off-the-earth perspective," said Angela des Jardins, director of the Montana Space Grant Consortium at the Montana State University.

Des Jardins said this will be the first time that a solar eclipse will be streamed live online.

The project will allow scientists to study the sun's corona and the lunar orbit, providing practical experience for students and making this major scientific event accessible to the public, des Jardins said.

The Aug. 21 event marks the first total solar eclipse visible anywhere in the lower 48 states since 1979.