'Get the f*ck out of here, coward': Watch the Charlottesville march organizer chased from his press conference 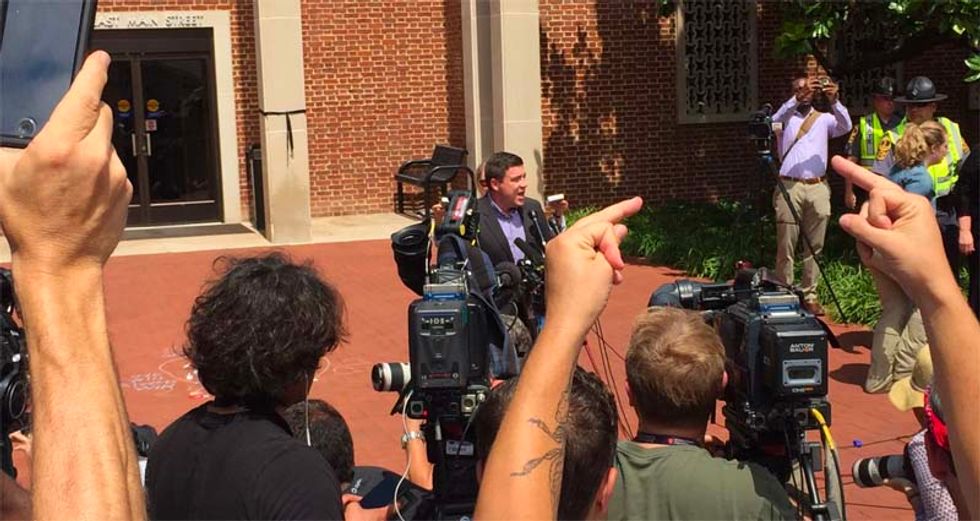 The organizer of the white nationalist march in Charlottesville attempted to address the press Sunday afternoon, only to be chased behind city hall for protection as spectators chanted "murderer" and "shame."

According to videos posted to Twitter, organizer Jason Kessler was escorted to a microphone in front of the Charlottesville City Hall by a cordon of police and attempted to speak before being shouted down.

Kessler was reportedly going to speak about Saturday's march that ended with one alt-right attendee driving through a crowd of counter-protesters, killing one woman and injuring nineteen.

In the videos posted below, Kessler can be seen being standing at the microphone as he was showered with "shame" chants.

He then was chased away while being protected by riot police as the crowd cursed him, with one man heard yelling, "Get the f*ck out of here, coward."

Protesters chased Jason Kessler away from his own press conference in Charlottesville. Here's my view: https://t.co/fTXctHgzsi
— Blake Montgomery (@Blake Montgomery) 1502648206.0