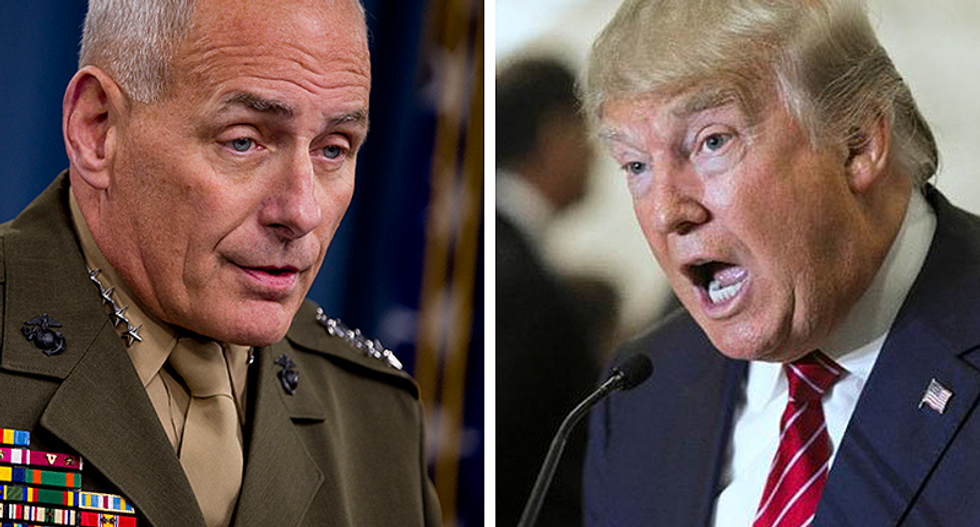 President Donald Trump is growing increasingly bored with spending days this week monitoring the situation in the Gulf of Mexico. He wants things to go back to the exciting life of speeches with swarms of upset staffers standing behind him.

"Trump appears to pine for the days when the Oval Office was a bustling hub of visitors and gossip, over which he presided as impresario," The Washington Post revealed reported Thursday. "He fumes that he does not get the credit he thinks he deserves from the media, nor the allegiance from fellow Republican leaders he is owed. He boasts about his presidency in superlatives, but confidantes privately fret about his suddenly dark moods."

But the biggest fear of Trump's friends is that he's on a "collision course" with Gen. John Kelly. Since Kelly took over as the White House chief of staff, he's instituted some military-style discipline that prevents Trump from talking to whoever he wants. Close friends were once able to call the White House and ask for Trump personally. Now they're sent to Kelly's office to be vetted. Trump's friends are even calling Kelly "the church lady" because of his strict ways.

It's cramping Trump's spontaneous style, which is actually good for his credibility among Republicans.

Sometimes, the president goes against Kelly or resents him simply because he hates the new system. "He has been especially sensitive to the way Kelly’s rigid structure is portrayed in the media," The Post said.

Former Trump advisor, Roger Stone, explained it's all part of who Trump is.

“Donald Trump resists being handled,” said Stone. “Nobody tells him who to see, who to listen to, what to read, what he can say.”

Stone went on to say that Trump is a "free spirit" and needs to be able to do whatever. Kelly treats Trump like a mushroom, who believes in the dark, according to Stone.

During his visit to Arizona, Trump learned border patrol agents that supported him weren't allowed to be present for his tour. Sources say that Trump raised his voice at Kelly for the decision.

Aides claim Trump has nothing but praise for Kelly's medals and credentials. Privately, Trump is "simmering with displeasure" over National Economic Council Director Gary Cohn because he knocked the president's response to Charlottesville.

Trump has also furious about Secretary of State Rex Tillerson, who disagreed with the president on Qatar, Cuba and Afghanistan. Rumors have swirled that Tillerson might even be ready to quit himself.