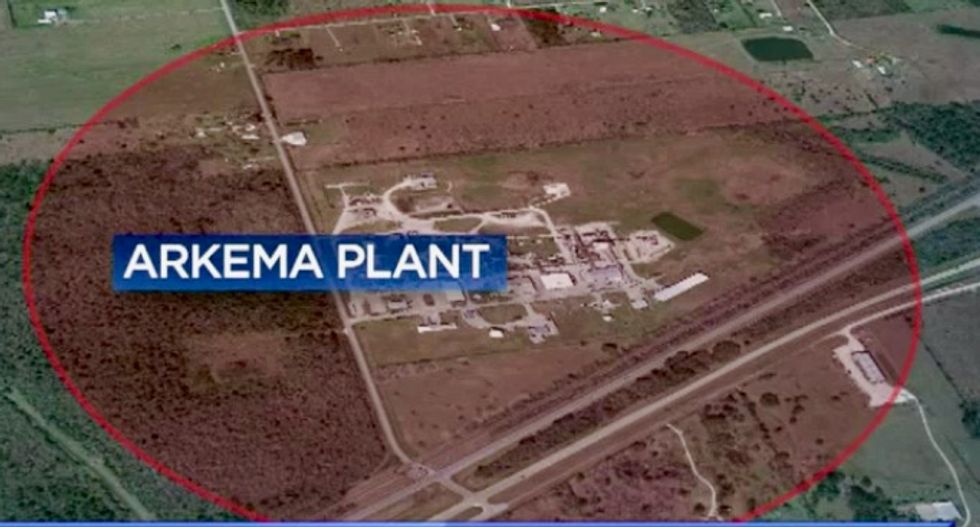 The Houston Chronicle's editorial board slammed local companies like Arkema -- whose chemical plant in Crosby, TX is currently burning out of control and may yet produce a dangerous explosion -- for placing their profit margins ahead of risks to public safety, a practice the newspaper called "a horrible mistake."

"After the disaster at the Fukushima nuclear power plant in Japan, every facility with dangerous materials should know to keep back-up generators above any potential flood line. Yet that precaution escaped Arkema," said the scathing editorial column.

Arkema President Richard Rennard has treated the chemical fires and explosions resulting from Hurricane Harvey's historic flooding as an unavoidable catastrophe that couldn't have been prevented. In fact, the company lobbied the Trump administration successfully for the privilege of ducking safety regulations that would have prevented this very circumstance.

"Rennard's fatalism in the face of a natural disaster is disingenuous. Experts identified the plant as high-risk, and Arkema could have designed a more resilient facility. But it didn't, most likely because management considered the risk too low and the costs too high," said the Chronicle.

Volatile organic peroxides stored at the Crosby plant could have been diluted ahead of the storm to make them non-reactive, but then Arkema would have lost the ability to sell the inventory. In acting to protect their profits, the Chronicle said, the company and others like it endangered the community.

"In public statement after public statement, companies working with hazardous materials or processes in Houston declare that their engineers have anticipated every eventuality, that the public has nothing to fear. Go away, they say, nothing to see here," the editorial said.

"Yet since Hurricane Harvey struck, Houston area companies have filed 32 air emission event reports with the Texas Commission for Environmental Quality," the editorial board reported. "The Coast Guard's National Response Center has listed chemical or gas leaks in at least 20 locations in Greater Houston."

The burning Crosby plant is not the only environmental emergency spawned by Harvey.

"In Rennard's world, compounds don't burn, they degrade. Chemicals don't explode, they combust. The smoke is noxious, but he won't say if it is toxic," said the Chronicle. "This may be appropriate in a chemistry class, but a concerned public expects straight talk, which it's not getting."

The editors went on, "If we learn nothing else from Harvey, let it be the danger of hubris. Despite claims to the contrary, executives will decide that mitigating a risk costs too much, and subsequent events will prove that they made a horrible mistake."