'I can't let you come here if you won't tell the truth': Don Lemon may have just banned Jack Kingston 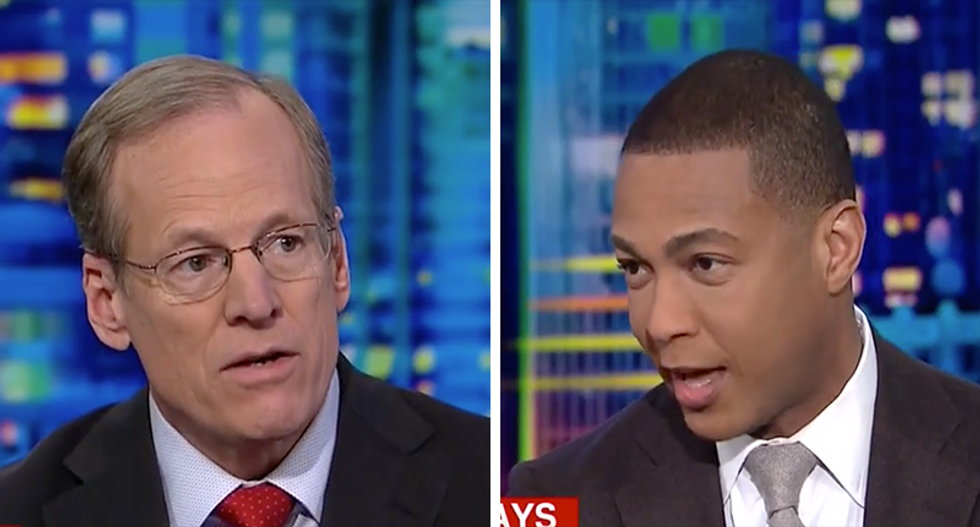 In a truly embarrassing moment, former Rep. Jack Kingston (R-GA) cited President Donald Trump's talking points that his communications team pushed out. The problem is that the talking points were factually inaccurate and had nothing to do with the topic. All the CNN panel and host Don Lemon could do was laugh.

"What if I prosecuted the largest group of white supremacists in history -- oh wait that already happened," Kingston said.

"Donald Trump prosecuted them? Are you talking about the attorney general and it it happened under Donald Trump?" host Don Lemon asked.

Attorney and legal expert Jeff Toobin was confused too. "What are you talking about, Jack?"

"What is this case I've never heard of?" Toobin asked.

“I’m not sure of the details, but I know that I was looking at that," Kingston tried to say as the panelists laughed and moaned. Sanders specifically cracked up.

"Shame on the person on the communication's team that gave that to you," Sanders said.

After another round of talking points that were factually inaccurate that Kingston repeated without knowing what he was talking about, Lemon refused to let him speak again.

"So, listen, Jack, I love having you but I can't let you come here if you won't tell the truth," Lemon closed the segment. "And if you repeat the lie -- if you repeat a lie enough people start to believe it and I don't want lies repeated and people believing untruths on this show. I will not be a purveyor of fake news."

It's unclear if this was Lemon drawing a line for Kingson and other Trump shills.

"I can't let you lie. Stop. Jack... by sarahburris

'I can't let you come here if you won't tell... by sarahburris