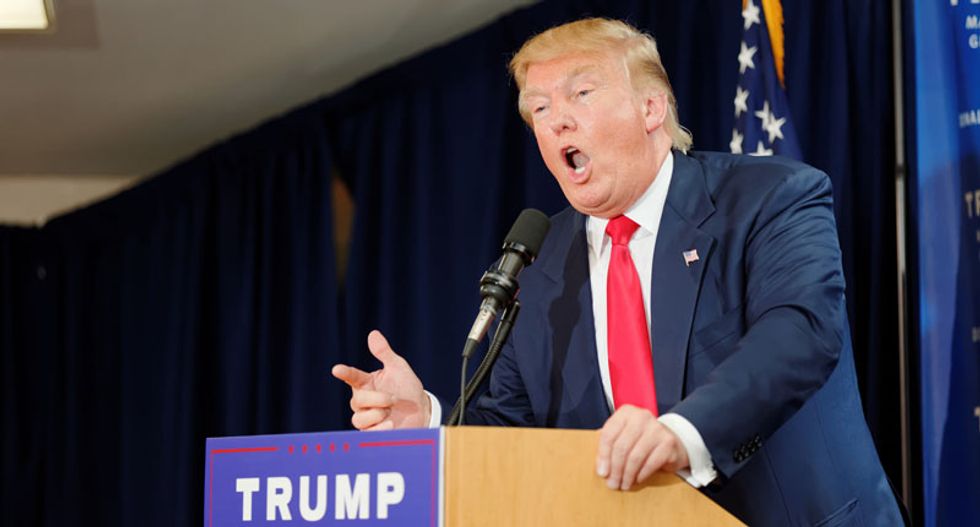 President Donald Trump's misleading statement about his son's meeting with a Kremlin-linked lawyer could provide a basis for impeachment proceedings, according to one legal scholar.

An anonymous Trump adviser told The Washington Post that the president had personally dictated an initial statement about his son's June 2016 meeting with a Russian lawyer. The statement, which was attributed to Donald Trump Jr., was criticized as misleading and left out key facts about the meeting.

Special counsel Robert Mueller, who is leading an investigation into alleged Russian meddling in the 2016 election, has since asked the White House to preserve all documents relating to the June 2016 meeting at Trump Tower.

If Trump intended to use the statement to hamper the investigation, it would be grounds for impeachment, according to University of Utah S.J. Quinney College of Law professor Christopher L. Peterson.

"In 1974, the House Judiciary Committee's first impeachment article against President Nixon stated that 'using the powers of his high office, [President Nixon] engaged personally and through his close subordinates and agents, in a course of conduct or plan designed to delay, impede, and obstruct the investigation' of the Watergate break-in," Peterson explained to Raw Story.

"President Trump personally wrote a public statement that misrepresents the nature of a meeting between his senior most campaign staff and agents of the Russian government on proposed conspiracy to facilitate Russian meddling in the presidential election. Congress could lawfully conclude that President Trump's misleading statement was an effort to delay, impede and obstruct the special prosecutor's investigation of Russian electoral interference," added Peterson, who has served as a special advisor in the Office of the Director at the United States Consumer Financial Protection Bureau.

"This is similar to subparagraph 8 of the Nixon’s first impeachment article which accused President Nixon making a misleading public statement for the purpose of deceiving the people of the United States into believing further investigation of the Watergate break in was unnecessary," he said. "Although Congress can certainly choose to ignore it, President Trump’s false statement regarding Donald Trump Jr.’s meeting with Russian agents could lawfully provide another independent basis for impeachment proceedings."

The statement authored by Trump claimed that his son had "primarily discussed a program about the adoption of Russian children" during the meeting. "It was not a campaign issue at that time," the statement added. However, emails released by Trump Jr. revealed he thought he was meeting with a "Russian government attorney" to obtain damaging information about Hillary Clinton that came from the Russian government.

During the tenure of Barack Obama, some Republicans in Congress brought up the idea of impeaching the president for various offenses. But the GOP never put forth a serious effort. Gutzman doesn't consider Trump dictating a statement on his son "to be that significant."

"Certainly neither is as significant as, say, a president's ordering that despite the law, five million illegal aliens be allowed to stay in the country permanently, or a president's selling his foremost initiative by telling the people on at least 36 public occasions that its effects will be completely unlike what he knows they will be ("you can keep your doctor, you can keep your plan, and the average family will save about $2500 per year"). Arguably neither of the Trump deeds you mention is as significant as a president's lying in his memoir about his views on marriage because he thinks that telling the truth would cost him votes. (Note: you can find online a story in The American Conservative from 2012 about my having voted for Obama in 2008.)

Gutzman added: "Also note that neither a president nor a Supreme Court justice has ever been impeached when his party controlled Congress."