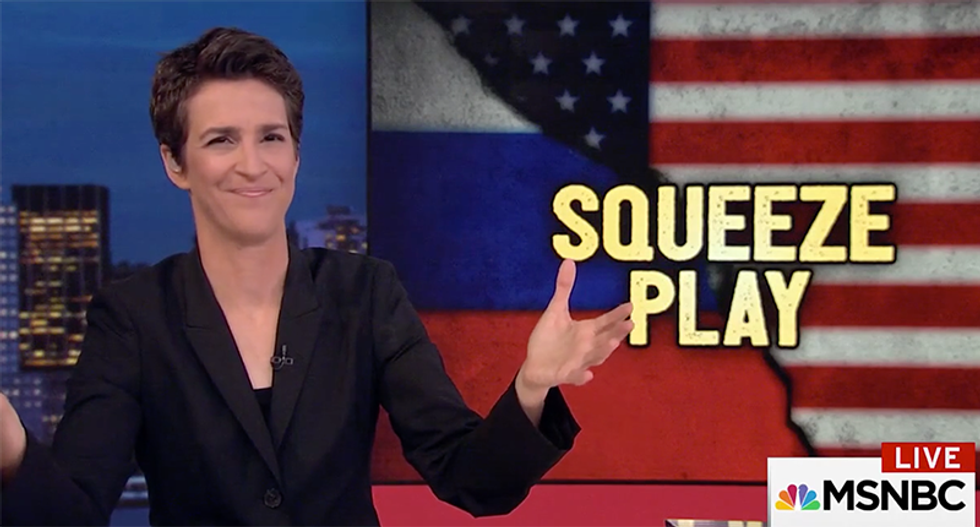 MSNBC's Rachel Maddow called out one of the new attorneys handling Paul Manafort's case for his curious connection to a former CIA official that was ultimately pardoned by former President George H.W. Bush.

Maddow began with the news that Manafort hired a new law firm that has an expertise in financial litigation. The law firm, WilmerHale, was once the firm where special counsel Robert Mueller worked. For that reason, Jared Kushner's attorney was forced to step aside on issues dealing with the Russia investigation. Kushner was forced to hire someone else who, it turns out, has ties to Russia. Maddow said that it always "stuck in [her] craw" that Kushner's lawyer was forced to step aside when Manafort's lawyer, also at WilmerHale was not.

"It didn't make any sense that there could be a conflict there for Jared but not a conflict for Paul Manafort," Maddow said. "It never made any sense."

She said that she was determined to figure it out and as a result of today's news, she did. When she called Manafort's lawyer at WilmerHale to get a comment, however, the attorney hung up on her.

"Then, within about an hour it was official: Paul Manafort has now dropped his lawyer on the russian investigation," she said.

But it's the one lawyer that Maddow found the most interesting.

"Do you know the name Clair George?" she asked. "That's not the name but that's an important part of understanding who the lawyer is. Claire is very rarely a man's first name but in this case it is. Clair George is famous for a decades-long, swashbuckling James Bond career at the CIA."

She explained, however, it wasn't George's career that he is most famous for, but how that career ended.

"He became the first ever senior CIA official to be convicted was serving at the CIA," she continued. "He was the third-ranking official at the CIA, Director of Operations, when he was charged with multiple felony accounts. Ultimately, he was convicted of perjury and lying to Congress. In December 1992."

George was sent to prison, but that's where Maddow explained things got interesting.

"Clair George was convicted in federal court in 1992 on December 9th. His tenure as a convicted felon however lasted only 15 days," she revealed. "Because on December 24th, that same year, 15 days after he was convicted, on Christmas eve, then President George H.W. Bush pardoned him. And the lawyer who represented Clair George through that, who saw him through being the highest ranking senior CIA official ever convicted of federal crimes for his actions as a CIA officer but immediately got him pardoned by the president. That lawyer that saw him through the process is named Richard Hibey and he will be the only tent pole holding up Paul Manafort's legal team. Pardons."

Maddow also brought up the lawyer that handles the financial information.

"One of his lead lawyers has a resume and a list of areas of expertise that gives you a very very clear indication of what Manafort thinks his representation needs are right now," Maddow said of Manafort's new attorney Kevin Downing.

"Areas of practice include the foreign corrupt practices act, tax fraud, violation of the bank secrecy act, mortgage fraud, tax shelter litigation, illegal cross border banking and congressional investigations," she rattled off from Downing's website. "It's like if you created a doll out of spare parts specifically to answer all of Manafort's potential legal concerns. And I should mention he's a certified CPA."