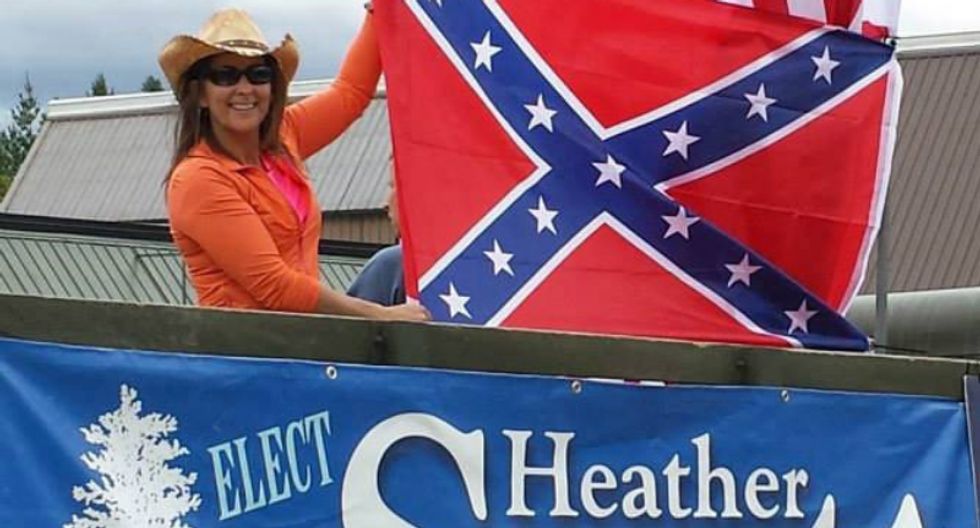 State Representative Heather Scott (R-ID), photo from her Facebook of her at the Priest River’s annual Timber Days celebration on July 25, 2015

Controversial Idaho state Rep. Heather Scott defended white nationalists by claiming that racism is not part of the movement.

“The way the media has set this up, the mention of white nationalist, which is no more than a Caucasian who (sic) for the Constitution and making America great again, and confusing it with term, ‘white supremacist’ which is extreme racism," Rep. Scott claimed in a Facebook post.

"Therefore, if one is ‘guilty’ of being white, one is clearly racist," Rep. Scott concluded. "And if one is white AND loves America, they are a white supremacist capable of carrying out violent acts against nonwhites.”

The Spokesman-Review fact-checked the claims of the Tea Party leader, speaking with University of Idaho professor Kristin Haltinner, a noted expert on right-wing social movements.

“Unfortunately Representative Scott is incorrect in her definition of white nationalism," Prof. Haltinner explained. "A white nationalist is a person who believes in a falsely claimed superiority of white people over people of other races and supports the creation of a white homeland, or nation; hence the term nationalism.”

“White nationalism is an umbrella term that has historically included a number of white supremacist organizations including the Aryan Nations, the KKK, neo-Nazis and other groups,” Haltinner noted.

Professor Haltinner wasn't the only expert The Spokesman-Review interviewed.

“This definition of white nationalism is patently false,” explained Vanderbilt University assistant professor Sophie Bjork-James. “White nationalists support the creation of a white ethno-state ruled by people of European descent. The movement espouses prejudice against people of color and Jews, and many white nationalists are aligned with neo-Nazi ideology.”

This is not the first racism scandal for the Blanchard Republican.

Two weeks after South Carolina lowered the Confederate flag from the state capitol, Rep. Scott proudly posted a photo of her holding "stars and bars" next to a sign for her political campaign.

In February, Rep. Scott was stripped of all legislative committee assignments after claiming female members of the Idaho House were able to advance in their careers only because they “spread their legs."