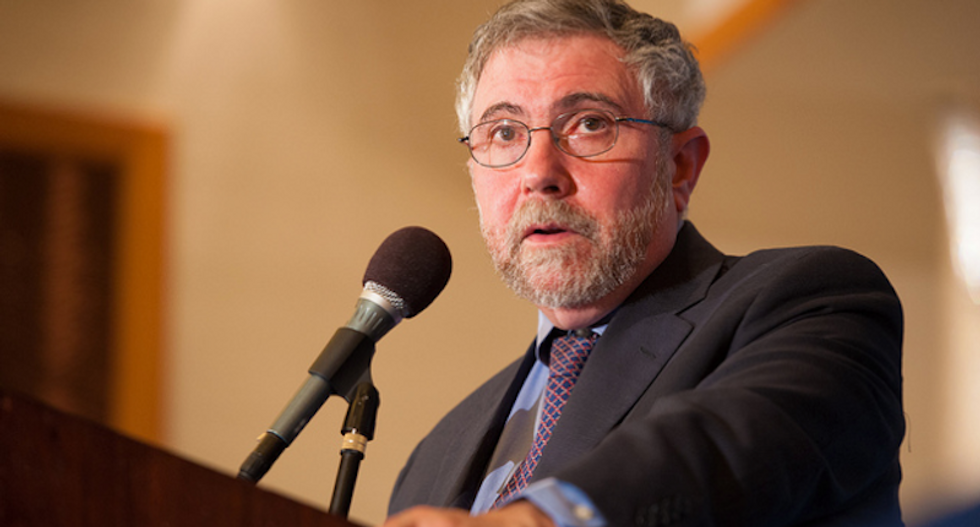 Anti-Trump Republicans love to claim Donald Trump is an aberration, a fake conservative destroying their ideals of individual liberty, small government and even smaller taxes with a cavalcade of lies. Conservative senators like Lindsey Graham and John McCain grandstanded last week about the GOP's broken health care policy and the erosion of senatorial norms. But what these speeches conveniently ignore is that Republicans have been lying to their constituents for years.

As Paul Krugman argues in his Monday column, "the Republican health care debacle was the culmination of a process of intellectual and moral deterioration that began four decades ago, at the very dawn of modern movement conservatism—that is, during the very era anti-Trump conservatives now point to as the golden age of conservative thought."

It all started back in 1970, Krugman continues, when Irving Kristol, a political commentator and the "godfather of neoconservatism," endorsed supply-side economics, "the claim," according to Krugman, "refuted by all available evidence and experience, that tax cuts pay for themselves by boosting economic growth." Fellow conservatives ate it up, grateful to have a palatable explanation for taking from the poor and giving to the rich.

Krugman notes that Kristol was downright gleeful about his deception, "[conceding] to having had a 'cavalier attitude toward the budget deficit,' because it was all about creating a Republican majority—so 'political effectiveness was the priority, not the accounting deficiencies of government.'"

This flagrant disregard for the truth about the economy ultimately set the stage for the GOP's lies about the Affordable Care Act, and again today during its quest for repeal. In 2009 Republicans raged against Obamacare for not covering enough people while shutting down all discussion of universal healthcare. Remember when they made giant out-of-pocket costs the cornerstone of their policy? Well, Republicans have conveniently forgotten that, as they shout about the act's high deductibles. Caught in their own lies, the GOP needs to create even more to try to destroy Obamacare.

The issue, as Krugman sees it, is "once you accept the principle that it’s O.K. to lie if it helps you win elections, it gets ever harder to limit the extent of the lying—or even to remember what it’s like to seek the truth."

Which is not to say that the past 40 years have been entirely free of Republican political courage. Krugman points to the Affordable Care Act's origins in a 1989 Heritage Foundation proposal. Yes, the plan Republicans have spent the past seven years trying to destroy had roots in an idea from one of their favorite think tanks. George H.W. Bush even proposed a cap and trade system for regulating acid rain, which would ultimately become law. Still, these moments of grace are few and far between.

Krugman would like to be optimistic that a bipartisan solution is possible, but he's not holding his breath. He concludes, "Republicans have spent decades losing their ability to think straight, and they’re not going to get it back anytime soon."