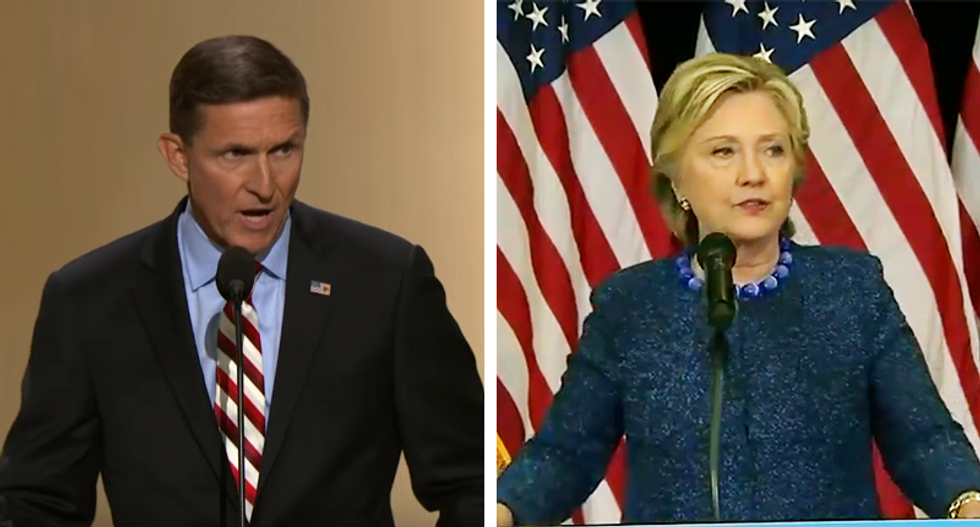 The special counselor investigation into potential Trump campaign collusion with Russia is focusing on former National Security Advisor Michael Flynn's involvement in an effort to obtain Hillary Clinton's deleted emails, according to a new report.

"The effort to seek out hackers who were believed to have stolen Mrs. Clinton’s emails, first reported by The Wall Street Journal, was led by a longtime Republican activist, Peter W. Smith. In correspondence and conversations with his colleagues, Mr. Smith portrayed Mr. Flynn as an ally in those efforts and implied that other senior Trump campaign officials were coordinating with him," WSJ reporter Shane Harris explained.

"Mr. Smith believed that some 33,000 emails that Mrs. Clinton said were personal and had been deleted had been obtained by hackers," Harris noted. "At the time Mr. Smith was trying to find the emails, Mr. Flynn was a senior adviser to the Trump campaign and had been on a short list of potential vice presidential candidates."

Flynn junior was fired from the Trump transition for his role in spreading the PizzaGate conspiracy theory against Clinton.

"The investigators’ inquiries show Mr. Mueller considers Mr. Smith’s effort to be potentially significant in the context of the wider probe into whether there was any collusion between people associated with the Trump campaign and the Russian government," Harris reported. "U.S. officials with knowledge of the intelligence said investigators also have examined reports from intelligence agencies that describe Russian hackers discussing how to obtain emails from Mrs. Clinton’s server and then transmit them to Mr. Flynn via an intermediary."

Lawyers for both Flynn's refused comment, as did the spokesperson for the special counsel.

During the 2016, Trump himself showed interest in obtaining Hillary's deleted emails from Russia.

“Russia, if you’re listening, I hope you’re able to find the 30,000 emails that are missing,” Mr. Trump said during a news conference in July of 2016. “I think you will probably be rewarded mightily by our press.”