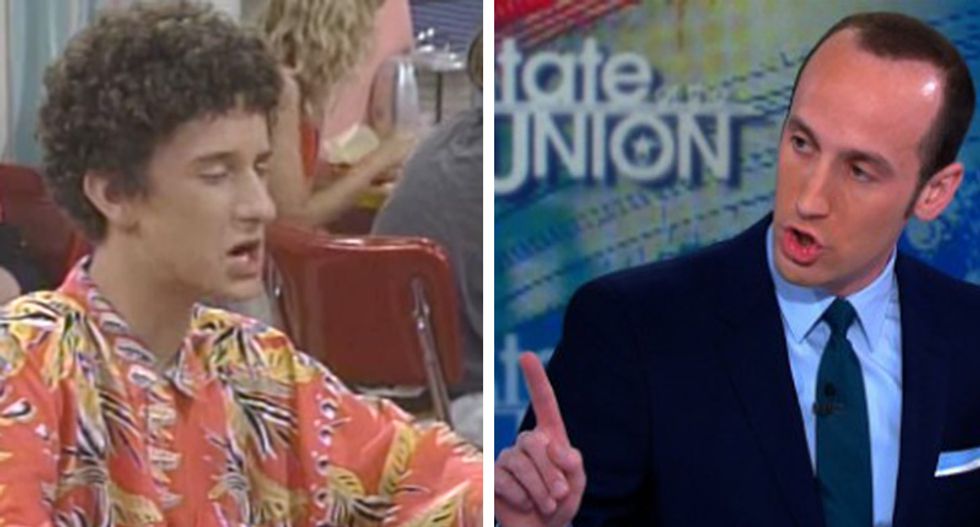 Trump aide Stephen Miller’s raucous arguments at a White House press briefing on Wednesday was sure to ruffle some feathers -- and, predictably, the Internet had a lot to say about it.

During Wednesday's briefing, Miller and CNN's Jim Acosta got into it over President Donald Trump's controversial new immigration policy and the meaning of the "huddled masses" quote engraved on the Statue of Liberty. Naturally, Twitter had a lot to say about it.

"Stephen Miller proves that if you don't want your new immigration plan to be called racist, don't let it be presented by a creepy racist," actor John Fugelsang tweeted.

"Poor Stephen Miller is getting very upset," another user wrote. "Its really hard when the facts, data and truth are not on your side Stephen."

Check out the best responses to Miller's "garbage" response below.

Stephen Miller is what white nationalism looks like in 2017. It's not KKK rallies & hoods, it's well-spoken, educated bigots in suits.
— Britni Danielle (@Britni Danielle)1501702826.0

All the kids who picked on Stephen Miller in elementary school owe America an apology
— Dan Pfeiffer (@Dan Pfeiffer)1501700894.0

I've basically totally given up attemping to model the minds of, say, swing voters, but does Stephen Miller play well to them?
— Chris Hayes (@Chris Hayes)1501703951.0

Sometimes Stephen Miller forgets that he's at the White House podium in front of the nation and not Union Pub in front of Sessions staffers.
— Matt Fuller (@Matt Fuller)1501704048.0

Seriously, Stephen Miller shouldn't be allowed to talk at a McDonald's drive thru, much less on live television.
— John Scalzi (@John Scalzi)1501704716.0

Just as I was wondering what the WH disaster of the day was going to be, in walks Stephen Miller. Back under the rock for you!
— Steve Redmond (@Steve Redmond)1501703981.0

Spoiler for Stephen Miller: The Statue of Liberty is from another country and came to America, just like all of us but the Native Americans.
— Donald J Orwell (@Donald J Orwell)1501704774.0

Stephen Miller saying Jim Acosta's name over and over again reminded me of this: https://t.co/eZADLQmQR6
— TrumpsTaxes (@TrumpsTaxes)1501703404.0