‘Sorry this is long’: Watch CNN’s Baldwin stop for water as she tries to read an unending list of Trump failures 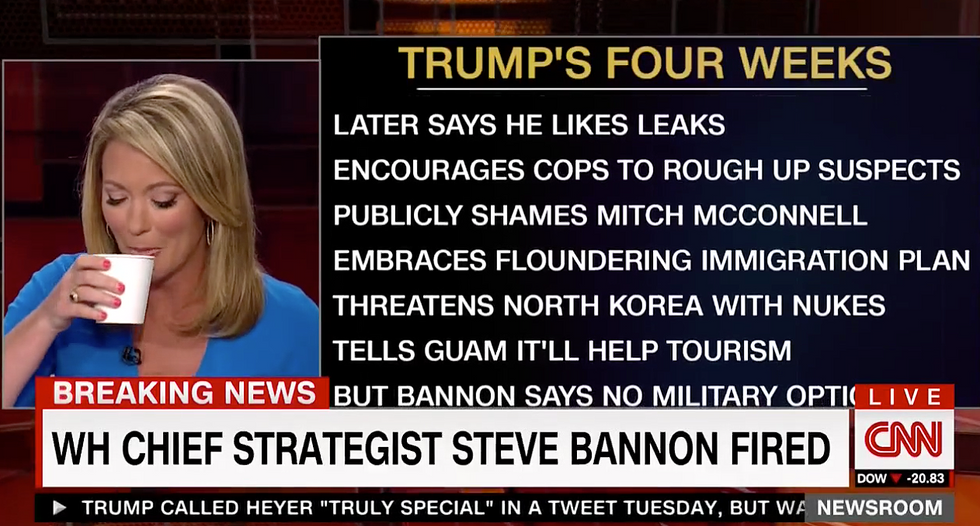 CNN’s Brooke Baldwin on Friday had a priceless reaction to the news that Donald Trump has fired chief White House strategist Steve Bannon, reading headlines from the president’s “chaotic four weeks” that were so long she had to stop and drink a cup of water.

“Steve Bannon has been fired,” Baldwin said. “It has been a chaotic four weeks, even by these White House standards, so let's just all take a moment just to remind you what has happened, incredibly significant events, one after the other.”

“So, in no particular order," she began. "President Trump … fires his chief strategist, fires his chief of staff, hires a new one, hires a new communications director, fires him, hires a new one, his fourth in seven months, publicly shames his attorney general multiple times, loses a health care bill, publicly shames the three republicans who voted against it multiple times, bans transgender individuals from the military without telling the military, ticks off the Boy Scouts, makes up a phone call with said Scouts, makes up another phone call with the president of Mexico, thanks Vladimir Putin for expelling Americans, hundreds of them, takes days to sign a bipartisan sanctions bill and then blasts Congress for making him sign it, condemns leaks but then says he likes the leaks because it shows people love him."

“Hold on a second, sorry,” she said, smirking as she reached for a cup of water. “This is long.”

“Encourages police to be rough with suspects during arrests, publicly shames the Republican leader he needs to get anything done—multiple times—embraces an unpassable immigration plan that sparks a debate about the Statue of Liberty and the definition of ‘cosmopolitan.’ He threatens North Korea with nuclear war, tells Guam it will help tourism, then his own chief strategist calls his bluff and says, no, there's no military option in North Korea, threatens Venezuela with a military option, after a Nazi rally in which someone was murdered, the president blames both sides. After backlash, cleans it up, denounces those white supremacists, but then hours later erases all of it and makes everything worse by again blaming both sides, saying there were fine people there. No, they weren't. They were Nazis."

“Suggests there's no difference between George Washington and Robert E. Lee,” she added. “Publicly shames CEOs who abandon him, then loses two of his entire jobs councils after execs jump ship, considers a pardon for, of all people, Sheriff Joe Arpaio, all the way facing accusations of racism, by the way. Plugs his winery in Virginia when asked if he will, as president, visit Charlottesville, tells the world to study a lie during a terror attack, and gets condemnations from Democrats, Republicans, former presidents, world leaders, allies, his own staff, and the Pope.”

“And still, still has no regrets,” she concluded.