Steve Bannon wants to weaponize Mueller probe as a way to take down Jared Kushner: report 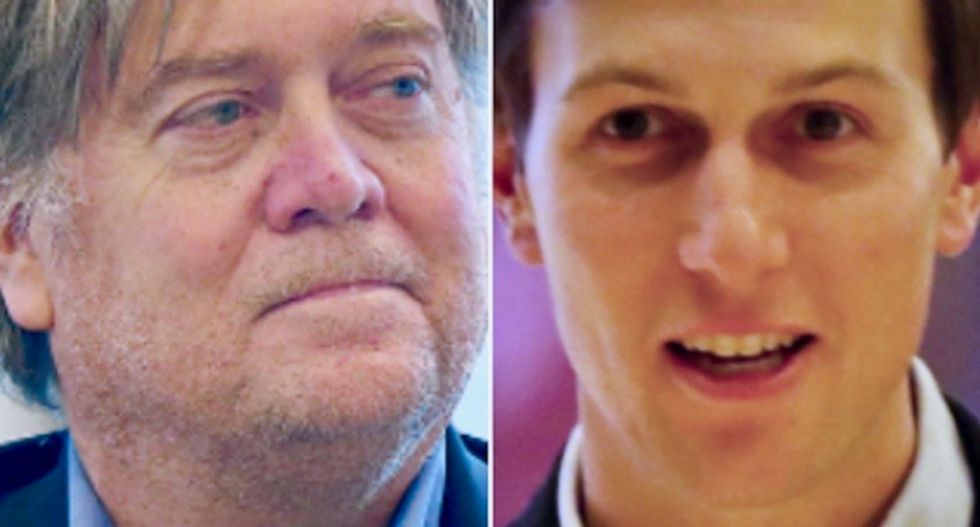 Fired White House chief strategist Stephen K. Bannon is readying his assault against President Donald Trump's son-in-law Jared Kushner, according to a report in Vanity Fair by Gabriel Sherman, and hopes to use Special Counsel Bob Mueller's investigation as the instrument of his revenge.

Kushner and Bannon were reportedly frequently at odds during Bannon's tenure. Kushner represented the "globalist" influence on the Trump administration's policies, which typically ran athwart the isolationist white nationalist stance of Bannon and his acolytes in the White House.

"Recently, according to several sources, Bannon has told friends he wants Priebus to give his account of the James Comey firing to special prosecutor Robert Mueller," wrote Sherman. "According to a source close to Priebus, the former chief of staff believes that the decision was made during an early May weekend in Bedminster, where Kushner, Ivanka Trump, and Stephen Miller were with the president. Trump returned to the Oval Office on Monday, May 8 and told other aides he intended to fire Comey."

Bannon has made it clear that he intends to settle old scores within the White House and the Republican establishment. In interviews after his firing he talked about getting his hands on his "weapons" and called Breitbart.com a "killing machine."

On Sunday, Breitbart.com's lead story was a broadside against Ivanka Trump, an aggregation of a Daily Mail article indicating that the president's elder daughter was responsible for Bannon's firing.

“Trump’s daughter Ivanka pushed out Bannon because of his ‘far-right views’ clashing with her Jewish faith,” the article claimed.

The website has already launched an attack on National Security Adviser Army Lt. Gen. H. R. McMaster, accusing him on Sunday of being a "Koran-kissing" terrorist sympathizer.