WATCH: One dead, 19 injured after car plows through crowd at Charlottesville protest 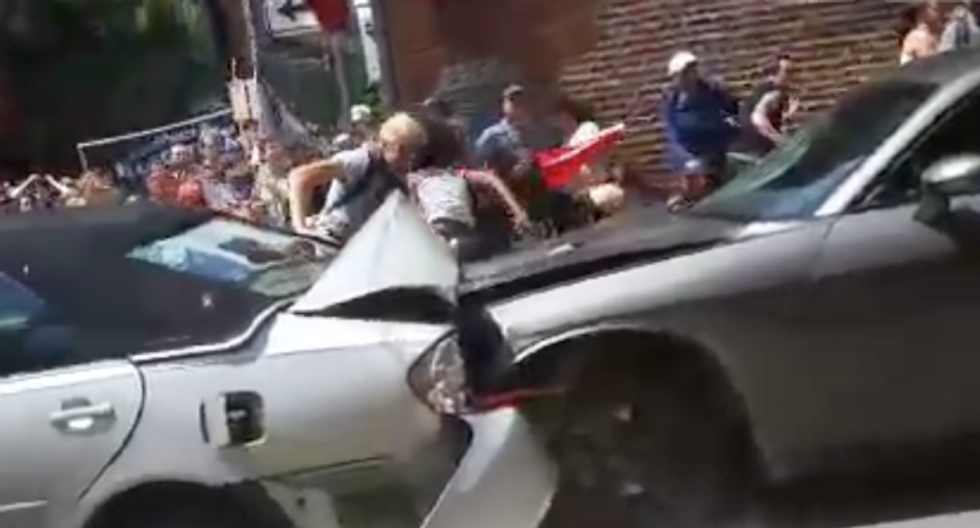 A car plowing through antifa protesters in Charlottesville, VA.

The white supremacist "Unite the Right" rally in Charlottesville, VA has resulted in multiple casualties after a vehicle plowed through a crowd.

The victims were members of a large anti-fascist or Antifa rally against the racist gathering and the car may have been used for an intentional act of violence.

One of the victims said, "they were just bulldozing through people."

"They just hit the gas and hit me...and then people just chased after them, throwing stuff at the car after that," he explained.

The protesters were chanting, "whose streets, our streets" when the incident occurred.

Virginia Governor Terry McAuliffe has declared a state of emergency.

horrifying video of a car that plowed through counter-protesters in charlottesville. Starts at 7:30 https://t.co/FnEnxVrs3c @Rebelutionary_Z
— Adrian Chen (@Adrian Chen)1502560355.0

I interviewed one of the guys hit by the #UniteTheRight car; not badly. He explains what happened #Charlottesville https://t.co/iEr4nyTyF9
— Alex Rubinstein (@Alex Rubinstein)1502559544.0

Video of car hitting anti-racist protestors. Let there be no confusion: this was deliberate terrorism. My prayers w… https://t.co/urTneNvAge
— Brennan Gilmore (@Brennan Gilmore)1502561618.0

Multiple victims have been hospitalized and the mayor of Charlottesville, Mike Signer, is reporting there is one fatality.

UPDATE: The Associated Press confirms that one person is dead and 19 have been injured in the incident.

Officials confirm that a suspect is in custody.