WATCH: CNN panel goes off the rails as Trump backer tells Symone Sanders to 'shut up' during racism discussion 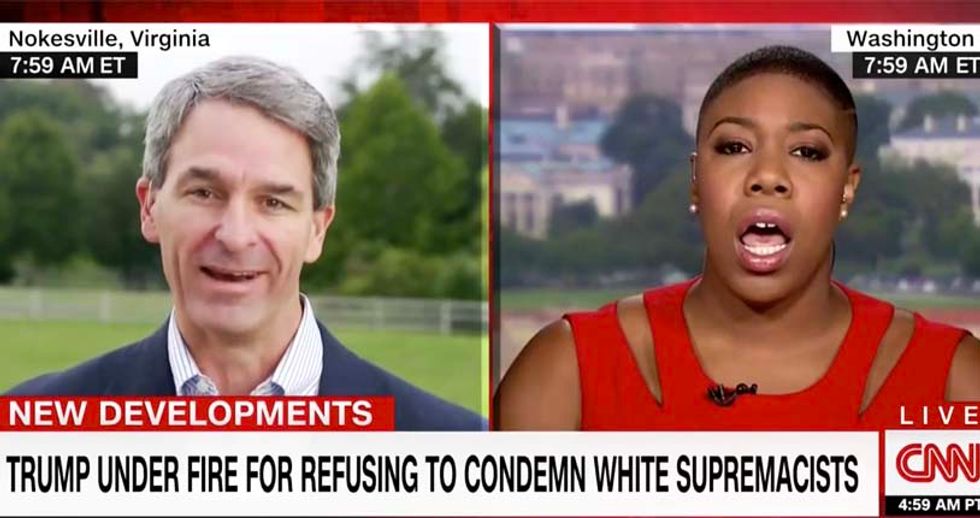 What started out as a discussion on President Donald Trump's tepid response to the tragedy in Charlottesville went seriously off the rails when a white backer of Trump told CNN contributor Symone Sanders to shut up during a discussion of race in America.

With host Chris Cuomo acting as a referee, Sanders and former Virginia Attorney General Ken Cuccinelli bantered back and forth about the white nationalist march in Charlottesville before things grew very heated as the two talked over each other.

Cuccinelli asserted that the "local blogger" who got the permit for the march used the Robert E. Lee statue as an excuse to bring various racist groups together, to which Sanders shot back, "And now someone is dead."

"Can I finish, Symone?" the Trump backer shot back. "Can you just shut up for a moment?"

"You don't get to tell me to shut up on national television," a furious Sanders retorted. "I'm sorry, under no circumstances do you get to speak to me in that matter. You should exhibit some decorum."

Cuomo jumped in saying, "Ken, you don't want to use language like that when you're talking to Symone. You can disagree but don't talk like this on this show."

"I keep getting interrupted," Cuccinelli whined. "How do I keep talking when people keep interrupting me?"

The conversation went downhill from there with Cuccinelli still refusing to apologize at the end of the segment.