WATCH: Joy Reid stumps Trump-supporting pastor with question about what president has done for black people 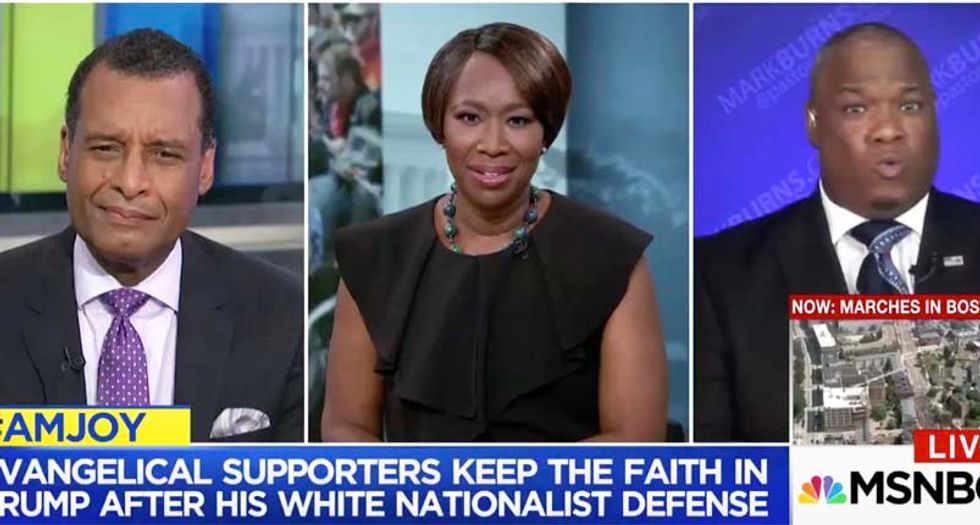 MSNBC host Joy Reid cornered a Donald Trump-loving black pastor who has refused to abandon his faith in the president and challenged him to come up with anything that Trump has done for the black community.

He came up empty.

Pastor Mark Burns of the Harvest Praise and Worship Center in South Carolina appeared on Am Joy to discuss Trump from a relogious perspective after New York City megachurch pastor A.R. Bernard stepped down from the unofficial board of evangelical advisers to Trump over the president's Charlottesville comments.

"I believe as I said on your show before, that my support for President Trump lies deeply within my desire to see our faith, the Christian faith, be center of politics again," Burns offered. "I believe as long as we have, as Dr. Bernard stated, a seat at the table, that it is our spiritual obligation to be a voice of God to the ear of the president of the United States."

After being pressed by Reid to defend Trump's comments on Charlottesville, Burns sidestepped the question stating, "I could never abandon, because I believe God has called me to this. I can never abandon anyone who I believe God has chosen me as a man of God, as a Christian, and as a leader in the body of Christ to speak the word of the Lord to the ear of the president."

Attempting another angle, Reid asked what Trump has done for his congregation and for African-Americans since he was elected.

"Pastor Burns, can you name any policies that Donald Trump has put forward that have helped people of color or Christians?" Reid asked.

"I want to answer Dr. Bernard and again --," Burns began before being cut off by Reid who pressed, "First, can you answer my question and then you can do that?"

"Pastor Burns, we've gone to a different discussion," Reid asked again. "I want you to answer my question if you could, please. name the policies that Donald Trump has put forward that have helped black people, people of color or Christians?"

“I believe number one, Neil Gorsuch is a person," Burns began before Reid cut him off again.

"We're talking about the things the president ran on," Burns protested. "He's pro-life. He's standing behind pro-marriage. He's Christian and pro-faith. That's the number one reason why Christians and evangelicals support the president of the United States. So we have a Supreme Court justice that believes in the core values."

"It's 100 percent about abortion and gay marriage? That's it? That's all that matters?" a bemused Reid asked.

"No. that's not all that matters, but it was the number one issue why Christians and evangelicals supported the president of the United States," Burns explained.

"Can you name anything else?" Reid remarked, to which the pastor praised the president for the economy.

Protests have swept Iran for nearly three months since Amini died after her arrest for an alleged breach of the country's hijab dress code for women based on Islamic sharia law.