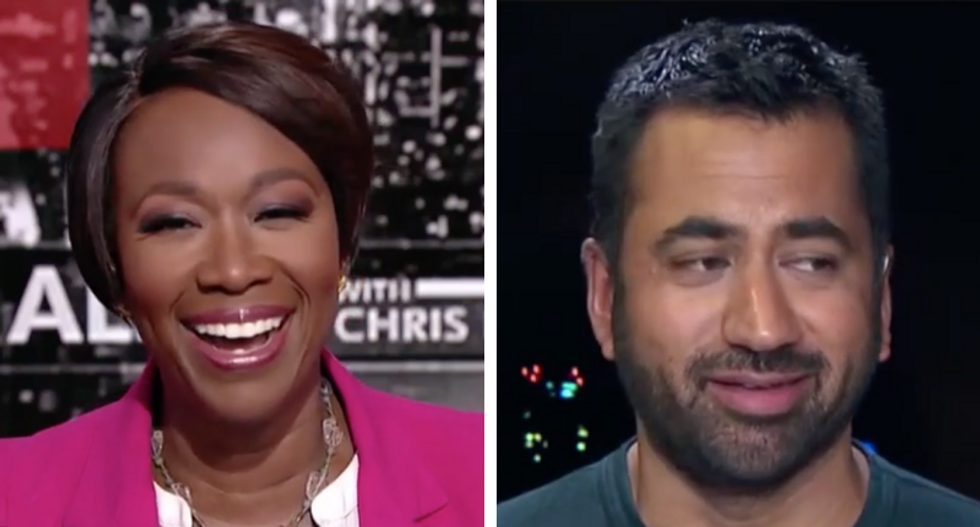 On Friday, every single member of the President's Committee on the Arts and the Humanities resigned in protest to President Donald Trump's "support of the hate groups and terrorists who killed and injured fellow Americans in Charlottesville."

MSNBC host Joy Reid interviewed actor Cal Penn who was one of the leaders responsible for getting an entire White House department to quit.

Reid asked Penn to clarify whether everyone did resign or if the White House was correct in claiming they had disbanded the council prior to protest resignations.

"We broke up with him first," Penn said with a grin. "He is not allowed to break up with us after that, I learned that in fourth grade."

Penn explained how the protest came about.

"This week was particularly pronounced and a lot of us didn't want to be complicit with this," Penn explained.

"A few of us said, 'look, I'm thinking of resigning, is anyone else feeling the same way?' Turned out we all did"

"We didn't set out to influence anybody else or to do what anybody else has done," he noted. "What do we tell our kids when they ask us, is this normal?"

Reid asked the actor if he would accept an invitation to visit the White House.

"I don't think i'm getting that invite," he predicted, adding, "I would politely decline right now."

The first letter in each paragraph of the resignation letter spell, "RESIST."

"The false equivalencies you push cannot stand. The Administration's refusal to quickly and unequivocally condemn the cancer of hatred only further emboldens those who wish America ill," said the resignation letter. "We cannot sit idly by, the way that your West Wing advisors have, without speaking out against your words and actions."

"Ignoring your hateful rhetoric would have made us complicit in your words and actions," the letter noted. "We took a patriotic oath to support and defend the Constitution of the United States against all enemies, foreign and domestic."

The letter suggested that the President should also resign.

This is not Penn's first criticism of President Trump. In January, Penn nailed Trump fans upset by celebrities speaking out.

“A reality TV celebrity just tweeted out a Supreme Court pick,” he said on CNN.

Dear @realDonaldTrump, attached is our letter of resignation from the President's Committee on the Arts & the Human… https://t.co/KZSBDzvAYP
— Kal Penn (@Kal Penn) 1503065334.0