We shouldn't let the racists own the Vikings 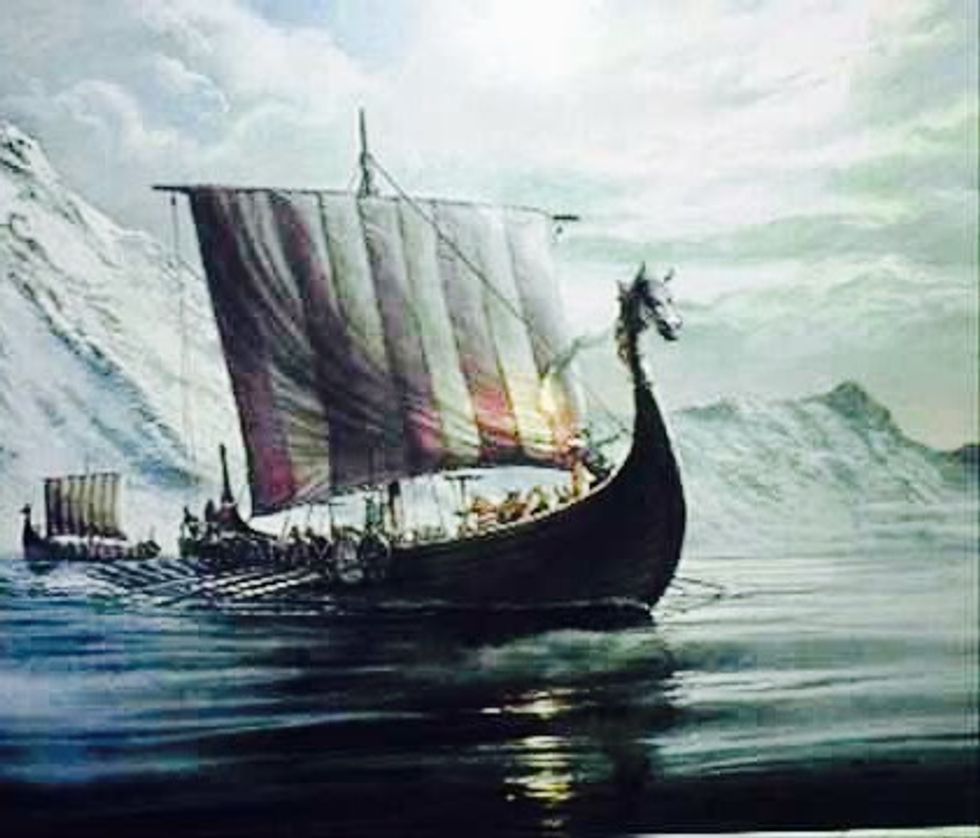 When I set out to write my novel The Half-Drowned King about Viking-Age Norway, I found only a few other pieces of fiction about Vikings, including Bernard Cornwell’s Saxon Chronicles, and Juliet Marillier’s Wolfskin. Even the non-fiction written for a general audience was minimal enough for me to read it in a few months and then move onto scholarly works. However, in the last few years, Viking and Viking-inspired fiction has gained popularity, with TV shows like Vikings, The Last Kingdom—a television adaptation of Cornwell’s series, and Game of Thrones, which borrows elements of Viking culture for both the Stark and the Greyjoy families.

Writers began to mythologize The Viking Age (793 to 1066 AD) almost as soon as it was over. Icelandic Saga writers like Snorri Sturlsson writing in the early 13th century mined the Viking oral tradition for his works. The Danish monk and historian Saxo Grammaticus (c. 1150 – c 1220 AD) also wrote fanciful tales of the Vikings purporting to be history. In a newly Christian world, Vikings stood for the pagan past, both more exciting than the present, but also full of sin, violence, and unnatural women.

In Victorian England, artists and writers put the medieval west on a pedestal for subtly and not-so-subtly racist purposes, imagining the period as a golden age for white Europeans. Though racism as an ideology was an Enlightenment-era invention, Vikings and ancient Germanic peoples were part of this, with Wagner’s operas and the publication of Donald A. Mackenzie’s Teutonic Myths and Legends, in which the horned helmet was first depicted (it has no basis in reality).

This interest in the medieval past took an even uglier turn with Germany’s Nazi party in the 1930s and 40s, which used runes and Germanic symbols in their uniforms, many of which were adapted from pre-Christian Scandinavian mythology and artifacts. The Nazis were attracted to the vision of a Germanic warrior as a man without either physical or sentimental weakness, whose women were strong in their own way, but closely tied to house and home.

There remain some very dark sides to mythologizing the past, and many today who idealize the Dark Ages, do so to promote anti-democratic ideas and racism. However, looking at the past to see our similarities to people separated from us by hundreds of years is valuable and can help us find commonality with people who have different cultures today. If we cede the cultures of the past to white supremacists and Nazis, then we concede that their interpretation of the past is accurate: there was a racist golden age that we might return to. If, on the other hand, we portray the past as complex, and the people in it as flawed and varied as we are today, then we provide a counter-argument that values all humanity.

The rise of “nerd culture” over the past fifteen years is one of the main contributors to the rising interest today in fiction about Vikings. The same people who love superhero comics often read high fantasy novels, many of which, like J.R.R. Tolkien’s Lord of the Rings, are set in pseudo-medieval worlds that have their roots in Anglo-Saxon literature and the Icelandic Sagas. It also seems to be no coincidence that interest in Viking tales has risen at the same time as an interest in post-apocalyptic dystopias. The conveniences of the modern world and the dangers of global warming, lead to a preoccupation with fears about what might take the place of our current technological golden age. We can imagine bleak futures by looking at how humanity managed in the past.

My desire to write fiction about Vikings began with wanting to understand the history of my ancestors, how I ended up where and who I am, by looking at the chain of culture and tradition, passed down, altered, complicated over the centuries. I wanted to know how different my ancestors were from me, how much the same.

The Vikings are best known for their overseas expeditions, the raiding trips that took them as far as Constantinople, and saw them sacking Paris twice. However, their politics at home were just as interesting. At the time of the Viking invasions, Scandinavia was undergoing a major political change, from small districts governed by elected kings, to consolidated power under a high king of a whole country. Local kings were demoted to jarls, and the high kings’ power became at least somewhat hereditary.

Harald Fairhair (born c. 850) is considered to be the first king of Norway, and according to Snorri Sturlsson’s mythmaking, also the impetus for the founding of Iceland, as those families that did not want to put themselves under the power of a high king fled overseas to settle the largely unpopulated island. Iceland was established as a proto-democratic government with a parliament.

Ninth century Norway’s political upheavals forced people at all levels of society to weigh the value of freedom from the taxes and demands of a high king against the security of a wealthy king with an army who could protect them and enforce his laws. These questions have changed their shape, but remain relevant today, as the US frequently weighs the desire for freedom—from surveillance, or to own firearms—against the desire for safety from terrorists or our own neighbors.

I was interested in Vikings for many reasons: I wanted to write about battles and sword-fights, dramatize the people who believed in gods like Odin and Freya, and examine what it meant to be a good person in a culture with very different values from our own. One of the appeals of writing historical fiction is exploring universal human questions in a different setting, with different rules. As long as we remember that no era in human history has been without injustice and hardship, or without people trying their best, we can avoid mythologizing the past, and learn from it instead.

Linnea Hartsuyker is the author of The Half-Drowned King: A Novel (Harper, an imprint of HarperCollins Publishers, August 1, 2017) .