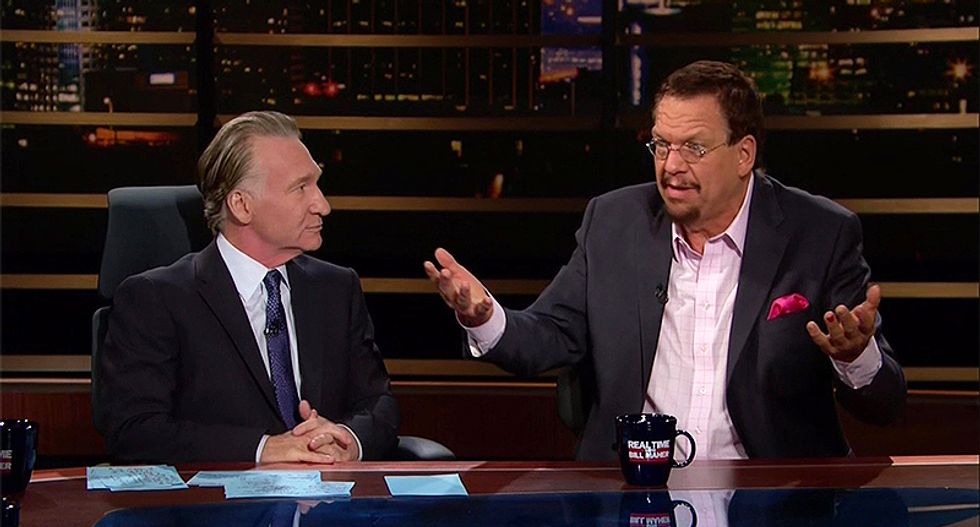 Magician and comedian Penn Jillette said that the amazing thing President Donald Trump has done is bring everyone together -- it's just against him.

"You know, I always thought if we keep voting for the lesser of two evils things get more and more evil," Jillette said during Friday's "Real Time" on HBO. "But when it finally came down to the actual moment, I know Donald Trump and whatever you think about Donald Trump he's worse!"

He also explained that he's been able to come together with many he once battled politically.

"A year ago, I would have had a zillion things to disagree with Sen. Al Franken (D-M) about - and I think we could talk for three hours without finding something to disagree with," he said.

Jillette also said that Glenn Beck is a friend of his and they fight constantly about politics.

He also said that the one thing he is excited about, as a libertarian, is that Trump will cause people to rein in the power of the presidency because there is a "full blown, dangerous wack-job" in the Oval Office.

"At least we've proved there is no Illuminati, no elders of Zion, because if any of them were in charge they would stop this!" he said.

When it came to the Confederate statues, he also said that people need to "win the goddamn war" if they want a statue about themselves. He cited Thomas Jefferson who he said would have been so disgusted we were building monuments to the founding fathers.

"We're not supposed to be kings! Or people we look up to. Let's all be equal," he said.