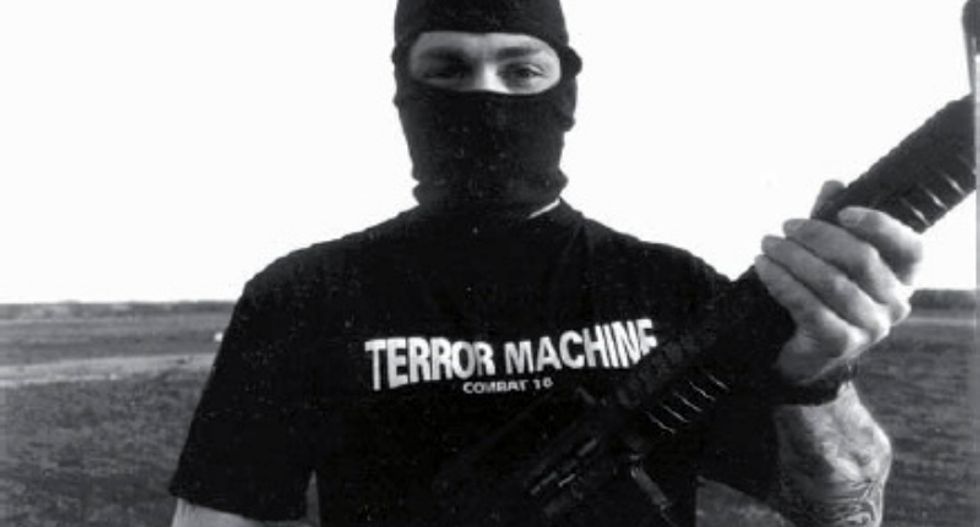 SPLC unearthed this photo from the Blood and Honour manifesto showing, "a masked man clad in the C18-Terror Machine t-shirt presenting a M16/AR-15 variant assault rifle. Alsbrook’s tattoos, visible in the White Terror video, seem to mirror those of the man in the photograph"

The town of Colbert, Oklahoma is facing a crisis of confidence in local law enforcement as city officials continue to employ a Police Chief linked to White Power websites.

Knapp is reporting that town officials are refusing to accept an offered resignation from Chief Asbrook.

"In Colbert, the general consensus from citizens, is that they were surprised and outraged and wanted interim police chief Bart Alsbrook to resign," Knapp noted. "But a city official said, they want to keep him. That view is different from the citizens they serve."

"I sure wouldn't want him stopping me," an African-American man told KXII. "I don't know anywhere in history where KKK, Neo-Nazis white supremacists have ideas and thoughts where they don't infringe on the rights of other people, especially the people of color."

There have also been calls for city officials to resign for hiring Chief Asbrook.

The anonymous African American man who said he was now scared of local police was still demanding Chief Asbrook resign.

"Get out of town, just resign," he said. "This community has no place for him."

In a sign this scandal won't be going away, the Southern Poverty Law Center released an in-depth expose featuring additional evidence documenting Chief Asbrook as a major hate leader.

SPLC claims Chief Asbrook is a leader in "Blood & Honour" which the organization says is "one of the largest networks of organized racist skinheads in the world."

In particular, Asbrook is linked to Combat 18 (C18) which is described as, "the street-fighting force turned terror cell born from B&H's mother chapter in England in 1992."

C18's nickname is, the "Terror Machine."

"The group is responsible for innumerable acts of violence, even against those within its own scene, murder, assassination and terror plots, and allegedly influenced the National Socialist Underground, a group at the center of the historic terror trial currently underway in Germany," SPLC explained. "C18 has apparently influenced other terrorist plots and helped to inspire Douglas Copeland, who was convicted in 2000 for his 13-day campaign of terror during which he exploded nail-bombs in various neighborhoods and locations central to London’s minority communities."

SPLC says Chief Asbrook has played a critical role in bringing the "Terror Machine" to America.

"Alsbrook is arguably among a small handful of Americans — along with Jon Pressley, of North Carolina; Kevin Kislingbury, of Ohio; Josh 'Hachet' Steever, of New Jersey; and Brian 'Scorch' Haizlip, of Virginia and North Carolina — who have done more than any others in this country to spread Combat 18’s mythos and message," SPLC claimed. "Alsbrook’s involvement with NS88 and ISD Records, the label formerly run by the infamous Will 'The Beast' Browning, of England, only cements such an argument."

The police chief has offered a fascinating denial.

"It’s not me, rather someone who has hijacked my name due to my combativeness and rejection to white power skinheads who were always coming to the heavy metal shows, starting fights and messing up our scene,” Asbrook told Tulsa World.

That explanation doesn't account for why Chief Asbrook appeared in the 2005 documentary, White Terror, where he is seen typing out a sentence about, "my part in NS88 videos" and at another point is seen wearing a Blood & Honor t-shirt.

The most terrifying image uncovered by SPLC shows, "shows a masked man clad in the C18-Terror Machine t-shirt presenting a M16/AR-15 variant assault rifle. Alsbrook’s tattoos, visible in the White Terror video, seem to mirror those of the man in the photograph."

In January, Raw Story reported that the FBI were afraid to share information with local law enforcement because white supremacists have infiltrated police departments.

Watch the town of Colbert react to the continued employment of Chief Bart Asbrook: