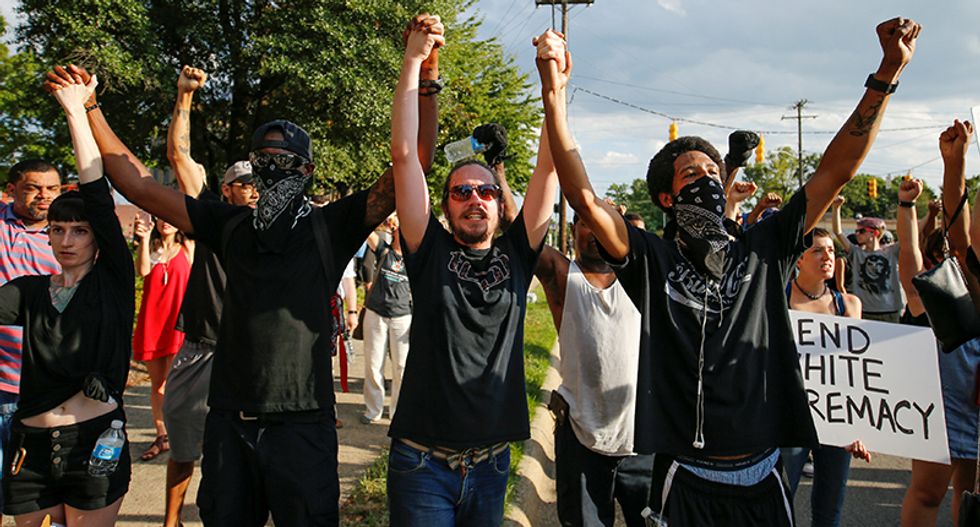 Counter-protesters gather after a report of a rally by white nationalists was disseminated over social media, in Durham, North Carolina, U.S. August 18, 2017. REUTERS/Jason Miczek

Cities across the United States are seeking ways to head off the kind of violence seen in Charlottesville, Virginia last weekend when white nationalists and neo-Nazis clashed with counter-protesters over the planned removal of a Civil War-era statue.

As they step up efforts to pull such monuments from public spaces and brace for a right-wing backlash, municipalities are re-evaluating their approaches to crowd control, permits, weapon regulation and intelligence gathering.

White supremacists have been emboldened by statements from President Donald Trump. A potentially volatile demonstration with mostly right-wing speakers is set for Saturday in Boston, with other events coming in days ahead.

"When you have an environment of anger and people carrying weapons, and a president that is tossing gasoline on that, I think that America should be deeply concerned," said Corey Saylor, a spokesman for the Council on American-Islamic Relations, which tracks Muslim hate groups.

Mayors face a tug-of-war between ensuring public safety and respecting Americans' cherished constitutional freedoms of speech and assembly, said experts and local leaders. The balancing act is further complicated by the right to carry guns, and even concealed weapons, in many states and cities.

"Certainly we recognize everyone’s First Amendment right to freedom of speech, but we’re also dedicated to freedom from fear," said Allison Silberberg, mayor of Alexandria, Virginia, a city near Washington, D.C., that has long struggled with what to do about a Confederate statue in the middle of a major road.

Silberberg said she is looking forward to the result of a review of how Virginia cities handle permits for demonstrations that was ordered by Virginia Governor Terry McAuliffe after Charlottesville, where right-wing marchers had a permit.

Many expect McAuliffe's review will lead to stricter limits on who can march and where. The mayor of Charlottesville, where a young woman was killed by a man who crashed his car into a crowd, has called for legislation to let local governments ban openly carrying guns at public events.

In Boston, authorities have granted a permit for a "Free Speech" rally on Boston Common and a counter-rally expected to draw a larger crowd. Police there have barred demonstrators from bringing sticks, bats or backpacks, as they did in Charlottesville.

More than half of U.S. states allow people to attend rallies with firearms, and some allow keeping those guns concealed, said Darrel Stephens, executive director of the Major Cities Chiefs Association, an organization of police department heads.

Such policies put police in the position of keeping track of demonstrators and counter-demonstrators, while also "waiting for that first shot to go off," he said, a nearly impossible job.

Some cities, but not all, prohibit the other types of weapons used last weekend, such as the long sticks disguised as sign holders that turned into batons, he said.

Police departments' main tool for preventing clashes is the process for evaluating whether to grant a demonstration permit. It gives cities some ability to discern possibly violent intentions, plot march routes to steer adversaries away from each other and restrict weapons, Stephens said.

That resulted from a report that a right-wing group planned a rally in Lexington over the possible relocation of two Confederate monuments. Such memorials to those who fought for the Confederacy and the preservation of slavery in the U.S. Civil war are seen by some Americans as offensive and by others as symbols of Southern heritage.

Anger on both sides over Confederate symbols is only the latest symptom of rising U.S. political polarization that sometimes escalates from peaceful protest to public violence.

As recently as the 1990s, white nationalist groups held demonstrations in small towns that were spectacles but usually peaceful, said Will Potter, a University of Michigan fellow and journalist who tracks domestic terrorist groups and civil rights.

More recently, he said, right-wing groups have taken to carrying guns and marching in bigger cities.

"It's just escalated in the last few months: the rhetoric of these groups, their affiliations with the White House... and the shows of force on the streets," he said.

Michael German, a former Federal Bureau of Investigation agent who is now a fellow at the New York University's Brennan Center for Justice, said he first saw a shift in 2016, when violence broke out in Sacramento at a neo-Nazi rally.

Earlier this year, he noted, there was fighting at a handful of pro-Trump rallies between alt-right extremists and anti-fascist, or "antifa," counterprotesters.

In many cases, German said, local police did not do enough to intervene. The current atmosphere is bringing together the ideological and violent wings of white supremacism "in a dangerous way," he said.