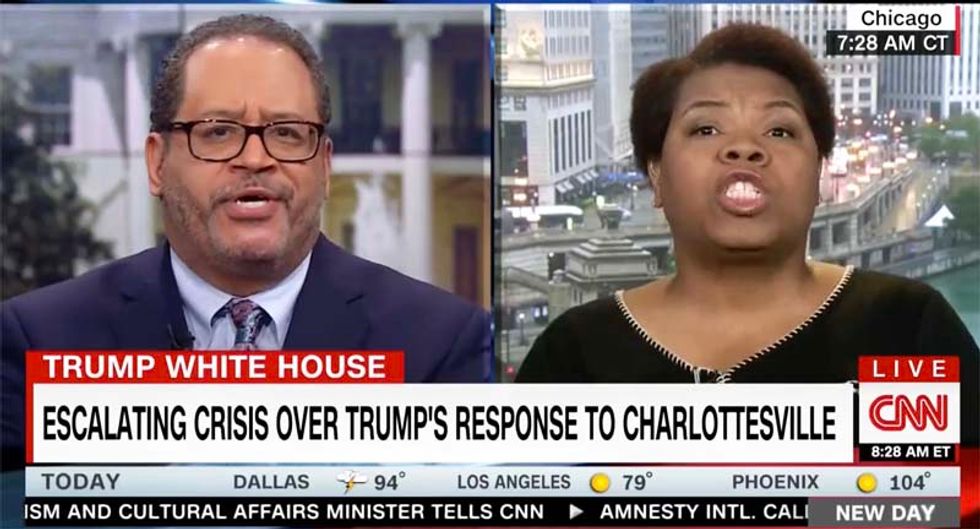 An interview with CNN's Poppy Harlow degenerated into a mostly one-sided screaming match Thursday morning when a former outreach director for President Donald Trump began shouting and refused to allow anyone else to talk about the violence in Charlottesville.

Moderating the panel that included academic Michael Eric Dyson and Brunell Donald-Kyei, Harlow quickly lost control as Donald-Kyei went on a lengthy and seemingly endless rant about the popularity of President Trump while defending his comments about Charlottesville that have most conservatives cringing.

Along the way, the outreach official blamed Democrats for inciting racial violence which baffled both the CNN host and Dyson -- who were unable to get a word in sideways.

At one point, as Donald-Kyei attacked the counter-protesters in Charlottesville, Harlow pulled her up and asked, "Brunell, who killed Heather Heyer?"

"No. Who killed her?" Harlow shot back before adding, "A white supremacist."

"I didn't say it was right," the Trump advocate parried.

"You're saying they both had weapons," Harlow pressed.

"They were armed, they didn't come to just protest," Donald-Kyei insisted. "They came armed, as well to counter protest."

As Harlow attempted to follow-up, Donald-Kyei went on a rant, saying racism in the U.S. didn't begin with the election of Donald Trump -- a statement that clearly baffled the CNN host and guest Tyson.

When Dyson to tried to interject, Donald-Kyei continued to shout over him, eventually calling him a "race-baiter."