'You're being childish': CNN conservatives tear at each other after one calls Trump 'hopeless' 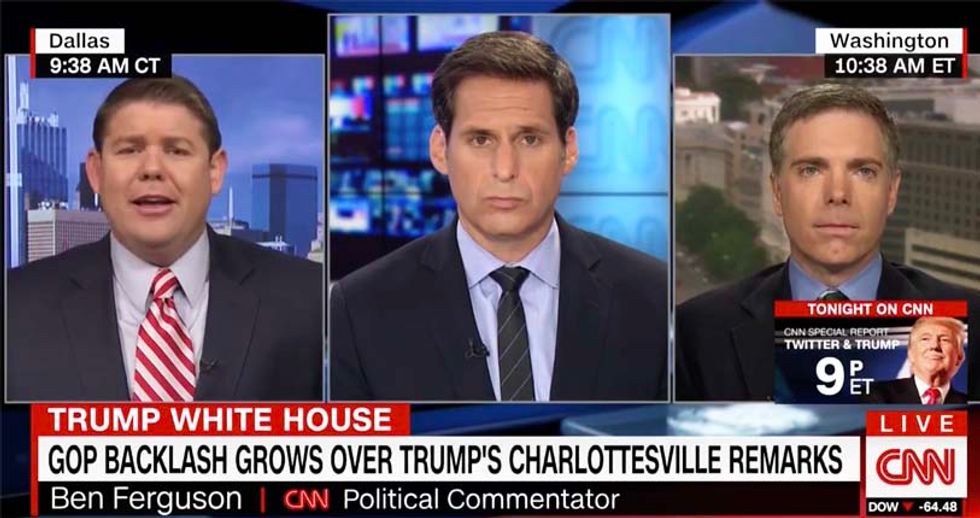 On Friday afternoon, CNN host John Harwood pitted conservatives Ben Ferguson and Matt Lewis against each other after Lewis wrote a column calling on Republicans to "give up hope" that Trump will be a good president.

According to Lewis, Trump's cabinet needs to walk out on the president.

"What I am calling on is for us to give up hope, those of us who hoped he would maybe, possibly pivot, mature in office, it's not happened," Lewis explained. "John Kelly, his chief of staff, a highly respected general can't get him to do it. Donald Trump is 71 years old. He continues, whether it's Russia or the tweets or attacking Republicans, including his own attorney general for failing to show moral clarity and specifically condemn, you know, white supremacists -- he just doesn't have it."

"I'm calling on Republicans to do a few things," he continued. "One, if you are an elected Republican, quit trying to, you know, appease Donald Trump. Quit worrying about his agenda and his legacy. Go about your business. If you want to pass tax reform, by all means do it, but do it independently. Go rogue. don't worry about the president of the United States. I would also urge Republican voters and conservatives to primary Trump. I think, some primary with somebody nobody has heard of, a Ben Sasse, somebody that is credible, experienced, a thoughtful conservative and they should rally behind this person and unify behind him."

"I urge anybody who wants to preserve their reputation, who is working for Donald Trump, to resign, leave, quit working for him -- he is not going to change," he added.

Conservative Ferguson took exception saying Trump has only been president for six months.

"I'm not saying it has been perfect," Ferguson added to the amusement of Lewis. "I criticize the president when he does things I don't agree with. He needs to show better leadership on issues, but you can't say because you didn't get your way to primary someone."