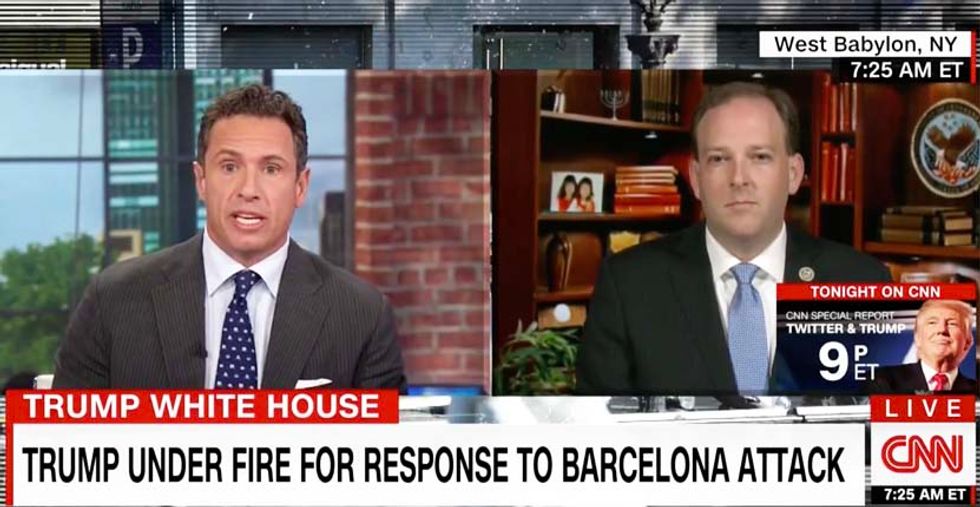 Republican Congressman Lee Zeldin (NY) gave a  profoundly uncomfortable interview with CNN's Chris Cuomo on Friday morning,  refusing to issue much in the way of a condemnation of President Donald Trump's comments the suggested Islamic terrorists should be lined up and shot with bullets dipped in pig's blood.

The Republican lawmaker, who Cuomo repeatedly noted is Jewish, seemed pained to have to answer questions about Trump's "pig blood" tweet and defense  of white nationalists, ended up being on the receiving end of Cuomo's snarky comment that he was "burning a lot of calories" with his evasions.

Noting that Trump's tweet about the apocryphal pig blood bullet story has been widely debunked, Cuomo put Zeldin on the spot, challenging him to defend the president.

"What I want to ask you, as someone who knows well what works and doesn't work in the war against terror, what do you make of the idea of the president of the United States asking people to study the idea of dipping bullets in blood and killing people in bunches to send a message to other terrorists?" Cuomo asked.

"Well, I don't know for America's own best interest it's important to be studying that particular example," the Republican deflected, refusing to use Trump's name, before giving a rambling answer about terrorism in the world.

The CNN host didn't let Zeldin off the hook.

"I get this puts you in a difficult position, being in the president's party," Cuomo offered. "The idea that what he's suggesting is you study a method whereby you would essentially disrespect the Islamic threat. Pig's blood would be offensive, the pig is a filthy animal, offensive to their faith, kill a big bunch of them and maybe that's what we should do in the war against terror. Don't you think that's something you should call out directly and tell the president of the United States not to suggest in no uncertain terms?"

"That particular tack take is not one the United States uses," Zeldin parried before launching into another disquisition on terrorism.

The bemused Cuomo finally observed that Zeldin refused to criticize the president during his long time-consuming answers, quipping, "You're burning a lot of calories here."