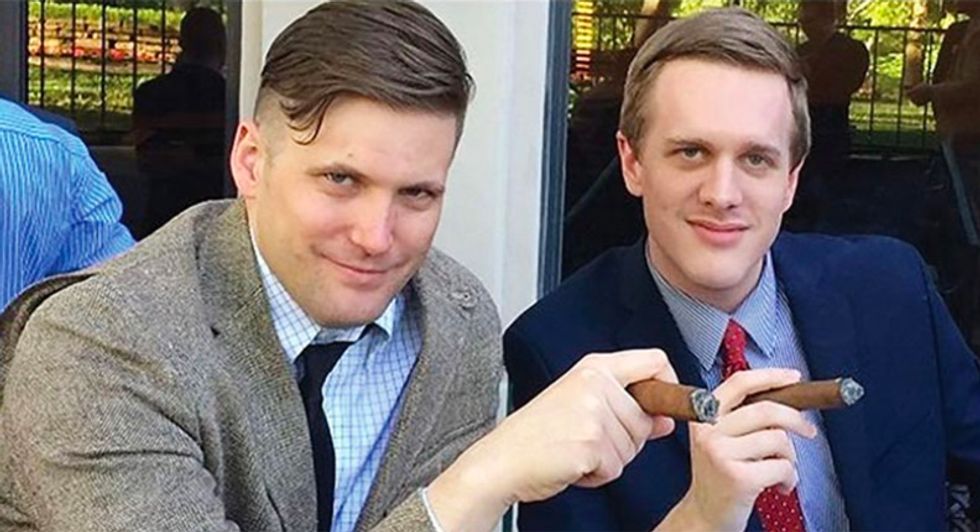 The attorney representing a student who wants to bring white nationalist Richard Spencer to Michigan State University has a history of encouraging a race war, that includes writing stories and novels featuring ultra-violent clashes.

According to the Daily Beast, attorney Kyle Bristow is representing a University of Georgia student who is quizzically suing the Michigan school that has refused to rent space for a Spencer talk on growing white nationalism in the age of Donald Trump.

Writing at the Beast, Mark Potok recalls Bristow from when he covered the attorney as part of his job at the Southern Poverty Law Center, describing Bristow as a "hardline racist" who has been "active for over a decade."

"Bristow [who attended MSU] took over a small conservative group, the local chapter of Young Americans for Freedom, and turned it into a vicious organization that tried to hold a 'Catch an Illegal Immigrant Day,' led a 'straight power' rally featuring signs like 'End Faggotry,' held a 'Koran desecration contest,' and invited leading racist ideologues like Jared Taylor to give speeches on campus," Potok writes.

He goes on to point out that Bristow later turned to writing racist fan fiction, including Bristow’s first novel, "called White Apocalypse, and it was a tediously written tome that claimed that North America was first settled by whites who were then massacred by invading, dark-skinned peoples."

Bristow's literary output is not limited to his novel.

As Raw Story reported in 2015, Bristow was the recipient of a award bestowed upon him by the State Bar of Michigan for a story described as a "racist revenge fantasy about murdering a black prisoner."

"Jack, sitting straight up in the chair with an aura of intent about him, pondered his situation as he stared at Tyrone Washington: Could there not be a more stark contrast between him and me?" Bristow wrote. "I worked hard my whole life to go through undergraduate and law school, I worked hard to pay back my student loan debt and to provide for my family, I played by the rules in everything I did, and I never hurt anyone. He, on the other hand, never worked a day in his life, he stopped going to school after the sixth grade, he is a leech on law-abiding people of whom he committed crimes, and he offends everything with which he has dealings. Even the tattoos on his body — especially the 'THUG' one on his forehead — constitute a manifestation of his repugnant nature."

In Bristow's White Apocalypse, he wrote about attacking "leftists," with Potok stating the one character was modeled upon himself.

“The supersonic projectile hit the leftist agitator one inch below the eye, and the bullet exited the back of his head nanoseconds later,” Bristow wrote. “Brain, blood, and skull fragments burst forth from what was once Greenberg’s head, and the leftist was blown off both of his feet. Greenberg died instantly, and his last words were, ‘We must destroy the plague that is Western culture.’”

You can read the whole report on Bristow here.