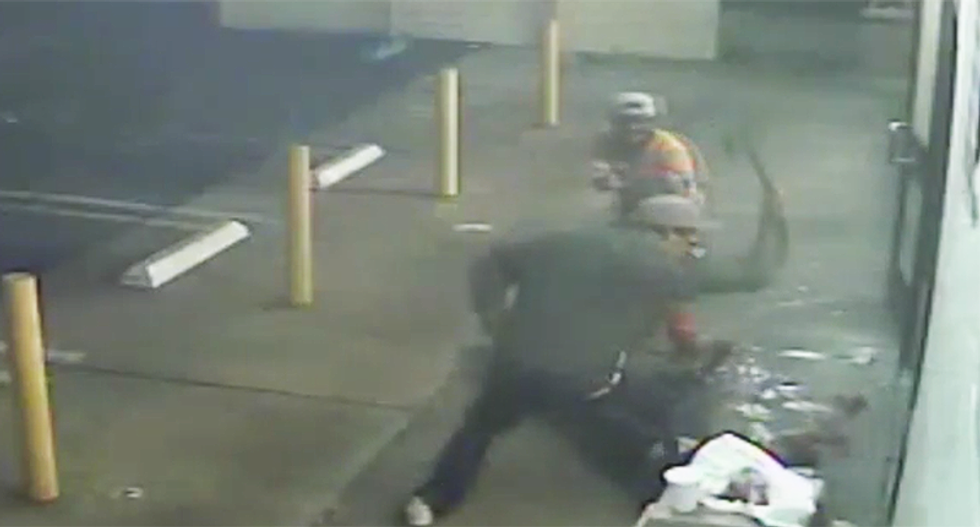 Man with axe attacks another man outside of West Hollywood 7-11 (Photo: Screen capture)

A transient man couldn't pay for his items at a West Hollywood 7-11 and when another person offered to pay for him, the man went after them with a double-edged axe.

According to Fox11, the Los Angeles County Sheriffs Department is searching for the transient man, who they have identified and arrested Kisu Brady Brown based on security camera footage before he allegedly attacked the Good Samaritan with the axe. The footage shows that Brown may have been attempting to steal merchandise and he appears to become agitated when the other man offers to help.

"It was shocking to everybody here at our station when we did receive the video," said Sgt. Jeff Bishop.

"What makes this unique is we have a citizen who is trying to help a transient or a homeless person, help another fellow citizen out, and to be assaulted like this, it could be anybody's family member and for somebody to just take the liberty and do that it's very shocking, it was shocking to everybody to everybody here at our station when we did receive the video," Bishop continued.

Brown has an extensive criminal past, according to the police sergeant, and he is known to many officers in the area.

The incident occurred Saturday at 4 a.m. and police are hoping community members can help find Brown. The man attacked has not been identified, but survived with severe slashes to his head and hands. He's recovering in the hospital.

"We witnessed this guy brutally attack an 80 year-old-man, punched him in the face, knocked him to the ground and then picked up a house brick and lobbed it at the guys head, said a couple racial slurs that I'm not gonna repeat," said Lee.

Watch the footage below -- be aware it is graphic: