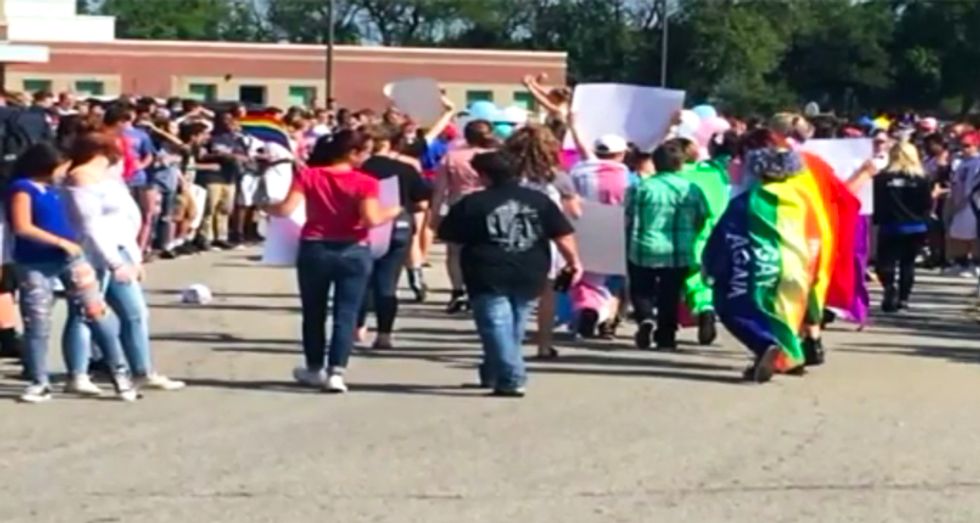 A high school in Kansas has launched an investigation into students who jeered and pelted LGBTQ classmates with candy while they marched in the homecoming parade.

According to Fox4KC, the Gender and Sexuality Alliance of Olathe Northwest High School was taking part in a homecoming parade only to be abused by fellow students who yelled "Make Olathe Northwest straight again" and told to kill themselves.

"People were throwing things at us, and I did hear a few words shouted at us kind of along of the lines of 'Make America straight again,'" explained one student who didn't want to show her face out of fear of retribution. "We were expecting to have fun and just walk around and show our pride."

According to the report, some of the students heckling their classmates were wearing "Make America Great Again" hats.

One mother of a student who was attacked said her daughter came home in tears, saying, "Mom, it was awful. They were saying awful, ugly things and calling us names."

According to the mom, who identified herself as Missy, "I’m embarrassed because this is where I grew up. This isn’t who we are, come on. Where is this coming from? Why? Why do we have to hate each other? I don’t get it."

School officials say they didn't see the abuse but are taking reports about it seriously.

In a statement, school officials said, "We were provided information late this afternoon that inappropriate student conduct occurred during our Homecoming parade today. We are taking this information very seriously and have immediately started an investigation. Please allow myself and our administrative team time to do our due diligence and conduct a full and comprehensive investigation. Olathe Northwest High School does not and will not accept any conduct that is disparaging or harassing to our students, staff or community. The safety and security of our students and staff is a top priority."

One student expressed misgivings about attending school, fearing for her safety.

"Before I thought my school was a safe place for me to be, and now I’m just kind of scared, and I’m wondering if I should even speak out," she lamented.

Watch the video below via Fox4KC: