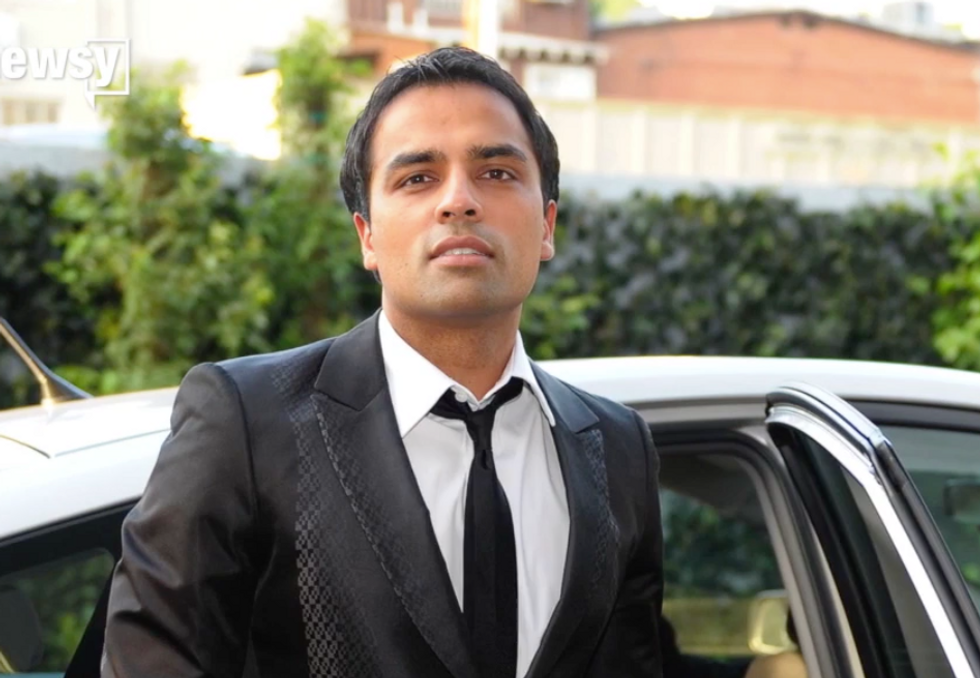 Gurbaksh Chahal is CEO of Gravity4. He was caught on video punching and kicking his girlfriend 117 times in 30 minutes. (Screen capture)

The Daily Beast reported Sunday that Chahal is the subject of a lawsuit which alleges that he called workers his "n**gers" and took out his violent rages on employees. Two other pending lawsuits against Chahal accuse him of misleading investors, hiring women based on their looks and making death threats against one employee of his multiple tech companies.

In 2013, Chahal briefly stepped down as CEO of his ad tech company RadiumOne after a vicious attack on his then girlfriend in a San Francisco penthouse.

Police examined surveillance video and determined that during the attack, Chahal punched and kicked the woman he was dating 117 times. He then tried to smother her with a pillow for 20 seconds. Court records show that microphones caught Chahal telling the woman “I’m going to kill you” four times as he beat her.

Nonetheless, he resumed his position at RadiumOne after he was able to get the 47 felony counts against him dropped by a judge who ruled that the video was inadmissible as evidence. Chahal crowed online that he was innocent and accused his former partner of having sex with other men for money.

The RadiumOne board ousted Chahal, but he formed a new company called Gravity4 and has continued to helm new ventures including trying to raise $100 billion to start a new Bitcoin-like crypto-currency, the Daily Beast's Kelly Weill wrote. Former reality TV star and hotel heiress Paris Hilton has given her imprimatur to the project.

"He's the biggest liar I've ever met in my life," said one former employee to the Daily Beast.

Gravity4 chief of staff Ali Al-Ansari filed a new suit alleging that Chahal is shockingly sexist, detailing a series of remarks he made against women's rights and equal pay for men and women.

Other pending lawsuits accuse Chahal of forcing alcohol on women, attacking another girlfriend and then pressuring an employee to help him evade charges, as well as asking male coworkers if women job applicants' breasts were attractive enough to hire.

Al-Ansari alleges that Chahal described to him in lurid detail how he wanted to further harm the two women he'd attacked, who he saw as trying to "ruin his life."

The final straw for Al-Ansari came in a Miami apartment when Chahal attempted to attack a woman and Al-Ansari physically prevented the assault.

According to the lawsuit, “Al-Ansari was forced to interpose himself between the woman and Chahal and physically intervened to defend this woman to block Chahal from hitting her. Chahal nonetheless managed to hit this woman. Al-Ansari repeatedly told Chahal ‘don’t touch her!’”

When Al-Ansari took out his phone and began to record the altercation, Chahal reportedly fired him on the spot. The lawsuit further alleges that after the firing, Chahal tried to illegally access Al-Ansari's personal laptop and destroy incriminating data.

Chahal was freely racist and open about his contempt for black people, the lawsuit says. He used the "N-word" frequently and was resentful and defiant when called out about it.

"I’m not going to stop the n-word," Chahal said in a discussion transcribed in the suit. "Dude, do you want me to go ahead and say n**ger, n**ger, n**ger? I don’t give a fuck. Martin Luther King might not like that, but he’s a n**ger, too.”