Pruitt or Zinke?: Maddow predicts who will be voted off the island next 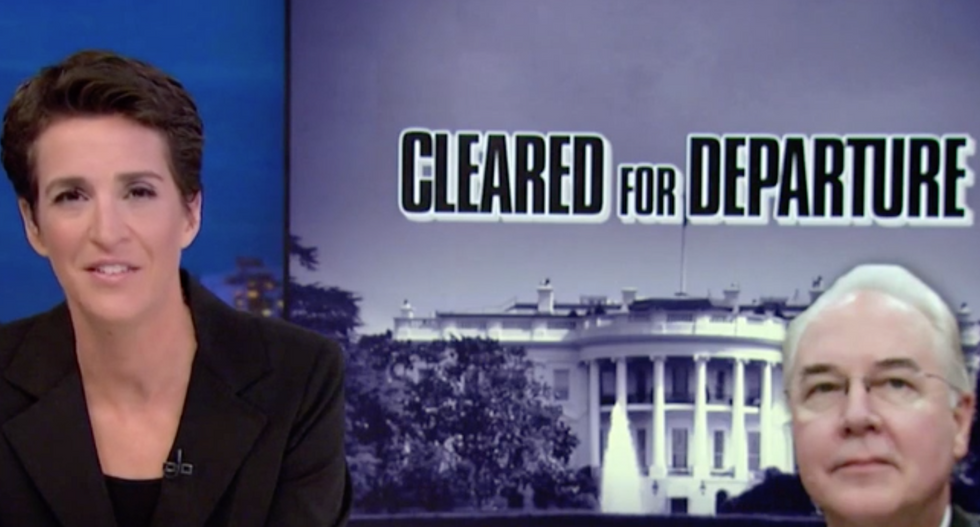 Following ten days of scandal about the use of government-funded private and military jets, Health and Human Services Secretary Tom Price resigned from the Trump cabinet on Friday.

As Rachel Maddow pointed out in the hours after his resignation went public, he's far from the only member of President Donald Trump's cabinet to resign -- and there's no telling who will be next.

"This really is a very deep, deep theme in this administration," Maddow said, listing off the other four cabinet members embroiled in similar corruption scandals.

First was Treasury Secretary Steve Mnuchin, who was denied his request to use federal funds to charter a private jet for his European honeymoon but who did fly on a military plane to Fort Knox to "inspect the gold" and watch the solar eclipse in August.

After the first news about Price's lavish government travel spending broke, soon after came reports that Environmental Protection Agency chief Scott Pruitt chartered $14,000 worth of private jets around his home state of Oklahoma. He also signed a contract for a $25,000 soundproof booth for his office, which his staff said he needs for "security."

Then came news that Interior Secretary Ryan Zinke, who Maddow noted is in the process of trying to sell off federal lands to oil prospectors, used government money to hire private jets to attend conferences in the Caribbean and to fly a short distance from his home in Montana.

And finally, a mere few hours before Price resigned, the Washington Post reported that Veteran Affairs head David Shulkin and his wife used federal funds to go on a "work trip" to Europe that included a visit to four castles and the women's tennis championship finals at Wimbledon. As Maddow noted, he did so after instructing staffers to make sure "employee travel in their organization is essential" with the hopes of decreasing their travel time.

"After Tom Price resigned today, the president chose to display his personal disapproval of Tom Price's terrible taxpayer-funded conspicuous waste flying to his golf resort in New Jersey," she concluded.

Trump's family has also been accused of wracking up major travel costs, including reports released the same day as Price's resignation that Trump's daughter and son-in-law Ivanka and Jared Kushner have spent nearly $400,000 government dollars on ski trips since he became president.

Watch Maddow track the Trump cabinet's travel spending problem and try to figure out who's next to go below, via MSNBC.

Committee for School Board Integrity announced Tuesday morning that they had gathered more than 4,100 signatures seeking a recall election for Matthew Smith from the Davison Board of Education, reported MLive.com.