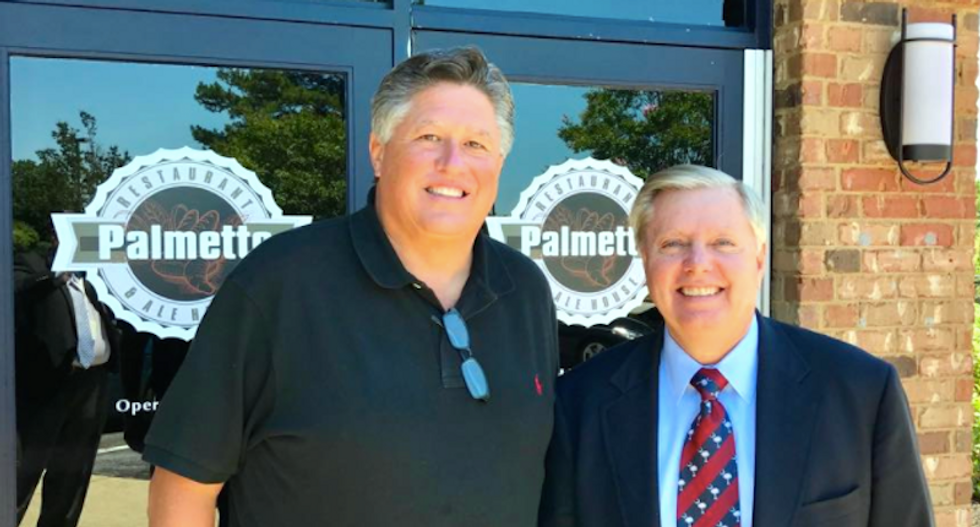 A South Carolina restaurant owner demonstrated his disagreement with NFL player protests by turning off games -- and he was lit up on Facebook.

"NFL will never be played at Palmetto Alehouse until all players pay respect to our flag and our country!!!" McCraw posted on the restaurant's Facebook page.

McCraw, who says he served in the military, said he doesn't care if he loses business, and he believes fans should boycott NFL games.

"It's no concern for me," he said. "I'm an ex-military guy. My whole concept is about being local and supporting the community. It is not about supporting a concept that is disrespectful to our flag or our country, and I don't think the people that come to my bar will feel that this is disrespectful to them."

McCraw agreed with the president that NFL players should be punished or lose their jobs if they don't stand for "The Star-Spangled Banner."

"Our president is our president, but I don't stand in unity with everything he says," he said. "This is a country of one people, and we need to stand for our flag."

Some customers left the restaurant because football games weren't available, and many social media users expressed disagreement with McGraw.

"Saddens me that so many Americans have conflated patriotism with nationalism and dissent with disloyalty," said Facebook user Kristen Halford. "I understand it's your prerogative to make a decision like this...I even admire it on some level, because you're going to lose a lot of business. Including mine."

"How is your business working to solve the problems that these players are protesting?" said Sue Bryker-Parham. "Thanks for letting me know so I won't spend a dime at a business that blindly supports white supremacy."

"What a crock of sh*t," posted Jonathan Weaver. "You are trying to capitalize on this. You are sick."

McCraw replied to many of the comments, including the negative responses, and said millionaire athletes were out of touch with people like himself.

“I hope you understand that some things are bigger than watching millionaires playing a sport and disrespect our flag, and our country,” McCraw said.