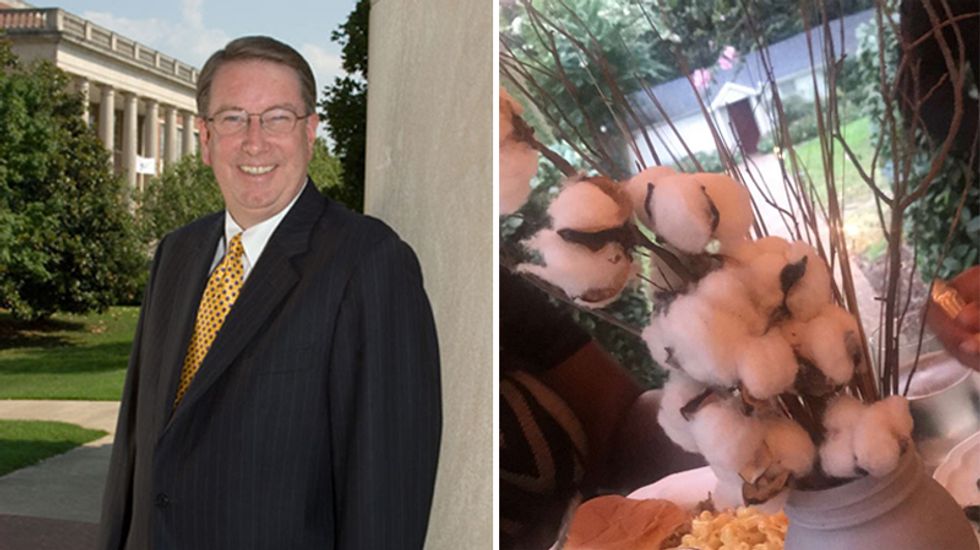 The president of mostly white Lipscomb University in Tennessee has apologized to students for hosting a dinner for an all-African-American group of students at his home that featured table centerpieces made up of cotton stalks.

According to the Tennessean, university President Randy Lowry invited African-American students to his home for dinner last week to chat about their experience at the university, only to have the students note the centerpieces which some found offensive.

Writing on Instagram, a student identified as "Nakaylayvonne" pointed out not only the centerpieces but also the cuisine served up.

"So I attend Lipscomb university and as most of you know that is a predominately white school. Tonight AFRICAN AMERICAN students were invited to have dinner with the president of the school," she wrote. "As we arrived to the president's home and proceeded to go in we seen cotton as the center pieces. We also stood and ate dinner, there were no seats to sit in and it felt very uncomfortable."

"We were very offended, and also the meals that were provided resembled many 'black meals' they had mac n cheese, collard greens, corn bread etc. The night before Latinos also had dinner at his house and they had tacos. They also DIDN'T have the center piece that we HAD tonight. A couple of minutes went by, the president was coming around and asking for our names and what our major was. He finally got to our table and my friend @kay_cyann asked why there was cotton on the table as the center piece. His response was that he didn't know, he seen it before we did, he kind of thought it was 'fallish,' THEN he said 'it ISNT INHERENTLY BAD IF WERE ALL WEARING IT ' then walked off."

"Last night we invited Lipscomb African American students to our home for dinner to discuss their experiences at Lipscomb. Several students shared with me their concern about the material used for centerpieces which contained stalks of cotton, " he wrote.

"The content of the centerpieces was offensive, and I could have handled the situation with more sensitivity," he continued. "I sincerely apologize for the discomfort, anger or disappointment we caused and solicit your forgiveness."

According to a diversity report, Lipscomb University's student population is slightly over 7 percent for black students and 6 percent Hispanic.