The consciousness of comedy has changed in the age of Trump 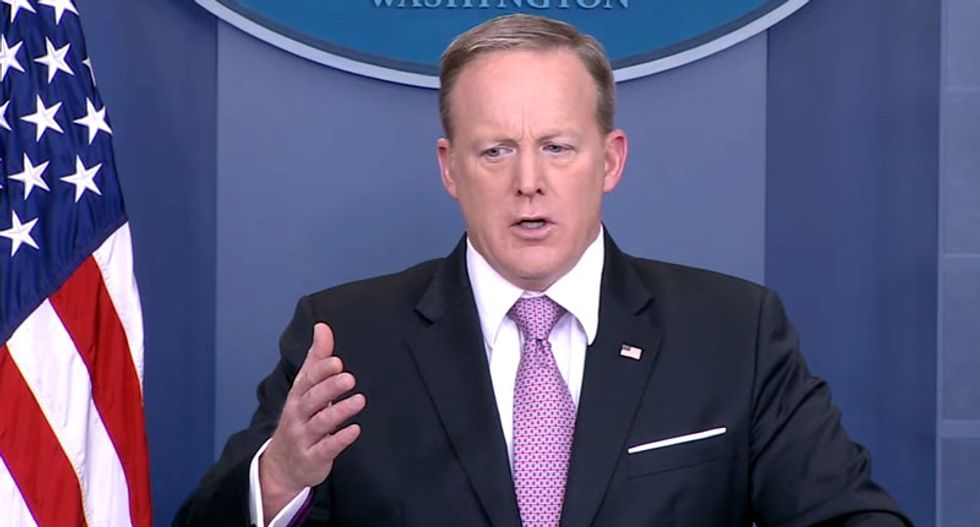 The unexpected appearance of former White House press secretary Sean Spicer at the Emmys this past Sunday first elicited gasps of shock, then titters and even laughs, and then, especially on Twitter and in media post-mortems, cries of outrage.

It all goes to show how much Donald Trump has not only eviscerated our political and moral discourse, but how he has affected the practice of political comedy too. And as in so many of the disruptions he has inflicted upon us, he has wound up discombobulating folks. People didn’t know whether to chuckle, groan or sputter in indignation precisely because of how Trump has recalibrated what funny means and what even the process of laughing means now. Does a laugh exculpate?

The media attacks regarding Spicer’s appearance have largely centered on the transaction between Hollywood and Washington, and on how celebrity of any sort, even minor celebrity like Spicer’s, seems to neutralize one’s misdeeds, including the blatant lying that Spicer did routinely.

Indeed, after the ceremony, Hollywood celebs cozied up to their new celeb in what media analysts called a nauseating spectacle. James Corden kissed him.

Throwing oneself on the tender mercies of the entertainment world is what pariahs do, and the Emmys were the latest stop on Spicer’s “normalizing” tour. (He appeared on Jimmy Kimmel’s show the previous Wednesday.) A few jokes, some tepid self-deprecation, a weak mea culpa. Having disgraced himself by serving the monster in the White House, and having turned himself into the administration’s court jester and the nation’s favorite fool, thanks in large part, to Melissa McCarthy’s scathing impersonation of him on Saturday Night Live, Spicer was trying to return to humanity, probably hoping to score himself a TV gig on Fox or CNN and whopping lecture fees. Already, Harvard’s Kennedy Institute of Politics, which rescinded an invitation to Chelsea Manning because she was seen as a “traitor” by the intelligence bigwigs, has awarded him a fellowship. Apparently lying, insisting on an alternative reality, and bashing the press are OK in Cambridge.

As for Hollywood, it has a notorious tolerance for welcoming pariahs. Director Elia Kazan was given an honorary Oscar after having testified before HUAC and naming the names of left-wing colleagues. And earlier this year, Mel Gibson got a bear hug and a best director nomination despite his racist and anti-Semitic rants. In Hollywood, all is forgiven.

So it was seemingly business as usual on Sunday when Spicer rolled out his lectern to poke fun at himself for exaggerating the crowd at Trump’s inauguration. Except it wasn’t. If anyone should have known how the comic consciousness has changed in the age of Trump, it should be Emmy host Stephen Colbert, who arranged Spicer’s cameo. After all, Colbert helped create that consciousness and has won a huge following for doing so.

Colbert understood the new Trumpian zeitgeist. When Tonight Show host Jimmy Fallon took the reins from Jay Leno and entered the late night competition, he used social media as both his vehicle and his model. Fallon’s Tonight was not only designed with bits that could play on YouTube, it was suffused with the easy camaraderie of social media — celebs basically kicking off their shoes and having fun with one another while we peons looked on, not dissimilar to the way we followed celebs’ Twitter feeds.

But this sort of bonhomie didn’t work in the age of Trump. When Fallon ruffled Trump’s hair while Colbert was ruffling Trump’s feathers, Fallon cooked his own goose because he didn’t understand that some people are beyond normalization, and Trump was one of them. Colbert began out-rating Fallon. Fallon didn’t realize what happened. Despite some feeble political jabs, he still doesn’t.

That’s because Fallon is operating in a political comedy yesteryear when political TV comedy was timid. Like the mainstream political media itself, it engaged in a false equivalency, so that the all-gums, no-teeth Jay Leno would parcel out his jokes — one barb for Democrats, one barb for Republicans. Nothing nasty. No side-taking. All in good fun. It was the politicians’ peccadilloes that made for guffaws: Carter’s being attacked by a swimming rabbit; Clinton’s McDonald’s jones and then his randiness; Bush’s malapropisms and general intellectual handicap. It was essentially caricature — finding a trait and playing on it, because the idea wasn’t comedy as social commentary; it was comedy as entertainment.

You could do that with normal pols, whatever their transgressions. But you couldn’t do that with Donald Trump for one very good reason. Though he provided a plethora of peccadilloes, and though he gave comics grist for a million mills, what he said and what he represented weren’t funny. They were ugly. He was a dangerous racist demagogue who threatened the country and the world. And he required a comic re-evaluation or, rather, defenestration. The humor aimed at Trump, then, was a harpoon, not a barb. Colbert, John Oliver, Seth Meyers, Samantha Bee, Trevor Noah and even Jimmy Kimmel spear Trump, and though the comedy is rich and very, very funny, it clearly has an angry edge that the mainstream political media cannot manifest, however much they may dislike Trump. That is why this comedy also seems therapeutic to so many Trump detractors. You can’t “Jay Leno” Donald Trump without seeming as if you had lost your own moral bearings. You need to destroy him. It is the only decent thing to do. And comics seem to be the only ones who can do it.

Given the hate that Trump has encouraged among his followers, Spicer’s appearance at the Emmys couldn’t be laughed off. Spicer may have thought he was another political celeb out for his 15 minutes of fame. He was wrong. He wasn’t just a clown or buffoon in a chaotic administration. He was an enabler for the presidential monster, and you can’t see him — at least not outside of Hollywood — without thinking of his repeated lies, or his contempt for both the public and the press, or his Orwellian double-speak, or the racism and white supremacy that Trump peddles and that Spicer never disavowed. This is only funny when Spicer was a target, when he was being laughed at, not laughed with.

By showing up, Spicer was supposed to be demonstrating that he was in on the joke. But this is what the critics were saying: there is no joke if he is allowed in on it. Remember this: when Spicer gets those TV gigs and lectures, he won’t be using them to revile Trump but to praise him. Which is also to say that there can never be normalization unless there is a normal. And nothing about Trump is normal.

This seething undertone had never been relevant before Trump, but it is an integral part of the new political comedy he engendered. We have limits now to funny, and one of those limits is giving people who helped perpetrate the terror an opportunity to laugh it away. Trump never disguised his meanness, so there is no statute of limitations for those who enabled him, and no forgiveness either. Self-deprecation won’t save them. Celebrity won’t save them. Recantation won’t even save them because they knew what they were getting into. That is what our comedians keep reminding us. They tell us that there has never been anything like this in America, nothing this surreal. We can laugh at it, but we cannot laugh it away. And we can’t let them either.

Sorry, Sean. You are stuck with a scarlet “T.”