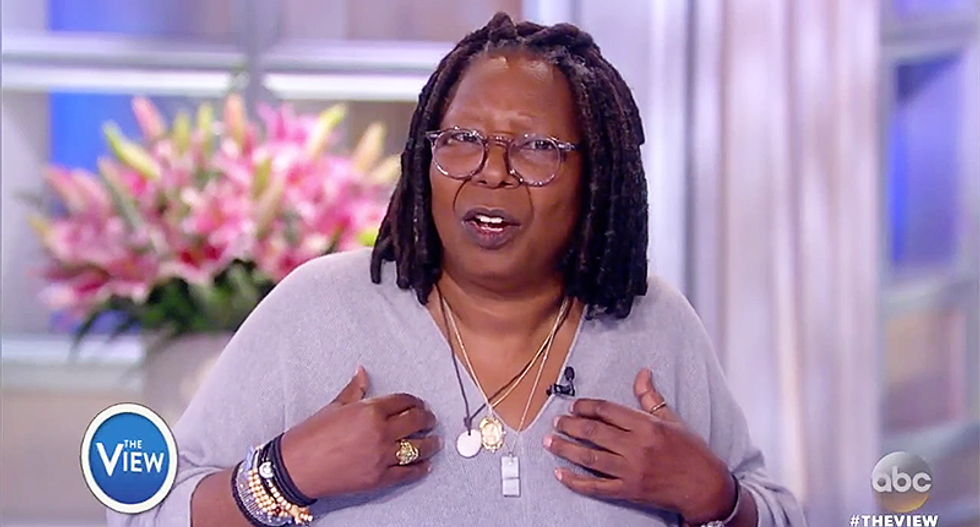 Puerto Rico was struck with two major hurricanes over the course of just a few weeks. The entire island is without power and a fuel shortage has caused generators to run out for hospitals, nursing homes and other healthcare facilities. Citizens are without water and food is growing scarce as aid slowly begins to trickle in.

The women of ABC's "The View" were furious at President Donald Trump's greater focus on the NFL players protesting than on those suffering in a U.S. territory.

"This morning there are desperate pleas coming out of Puerto Rico, which is dealing with the devastating aftermath of Hurricane Maria," announced co-host Whoopi Goldberg at the top of the Tuesday's show. "Now, the official White House Twitter response noted that the country is already suffering from broken infrastructure, massive debt, and is in deep trouble. Um, I'm not sure that's what they needed to hear right now from the guy who is supposed to be running the country. I wonder if he realizes that these are American citizens in Puerto Rico. This is part of America."

Co-host Sunny Hostin was furious, saying she was frustrated seeing Trump's tweets compared to those he tweeted out about Texas and Florida.

"When he talked about Texas and Florida 'are doing great,' but Puerto Rico, which was already suffering from broken infrastructure and massive debt is in deep trouble. Well, guess what, Mr. Trump!" she exclaimed. "The reason that Puerto Rico is in deep debt is a little something called the Jones Act, which means Puerto Rican businesses, get this, have to buy goods off of U.S. ships made in the United States with American crews. And also Puerto Rico doesn't have bankruptcy laws so when you get into trouble you can't bail yourself out, Like Trump did three times with his businesses! Puerto Rico doesn't have that."

Co-host Sara Haines said that the one thing people do need to hear is that hope is on the way and the American government is coming to help.

"What's going on is they're having hysteria," Haines said. "People can't reach them and they can't reach anyone else so FEMA is saying there's a lot of things happening but when you're going through this, fear is the dominant thing. They don't have food. There are mosquitos and diseases hitting them. Someone needs to say, 'We got you.' Criticize the political structure later. This is the time to say, 'We won't let you fall, like we got you.'"

Behar jumped in again to say that those who were impacted in Texas and Florida certainly weren't subjected to Trump's attacks on Twitter.

Goldberg repeated again that she honestly believes that Trump doesn't know that Puerto Rico is part of the United States and that's the reason for his lack of response.

Democratic Senate Leader Chuck Schumer has promised the island that help is on the way.

'The View' women wonder if Trump simply doesn't... by sarahburris