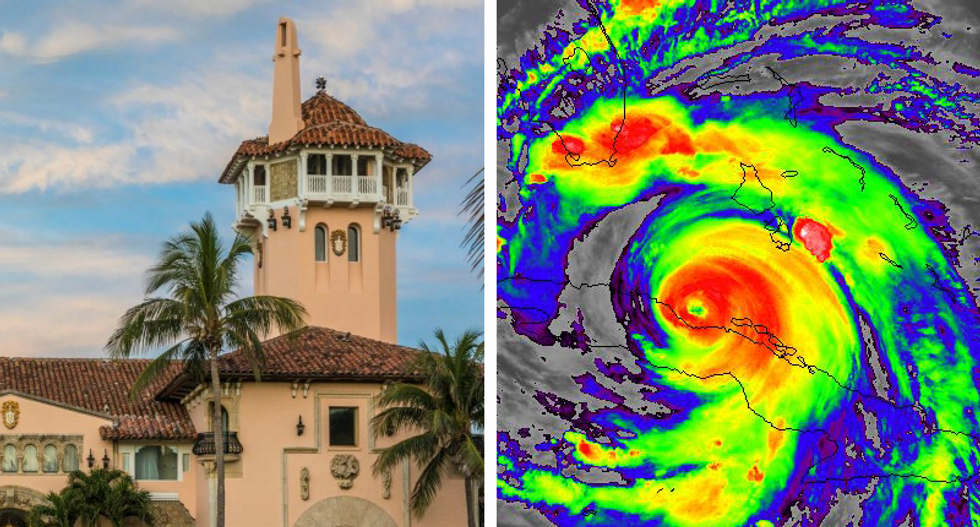 With Hurricane Irma threatening all of South Florida, the Huffington Post has learned that President Donald Trump's Mar-a-Lago estate is federally insured.

"The program provides affordable insurance in flood-prone zones where private insurers have traditionally refused to insure properties because they’re so vulnerable," HuffPost explained. "Some critics say the program benefits affluent people who live on beachfront property, essentially allowing them to live in places that are at a high risk of being damaged."

Mar-a-Lago -- the "Winter White House" -- was evacuated in advance of Hurricane Irma's landfall.

Trump purchased Mar-a-Lago for $10 million and has already received $17 million in insurance payouts for hurricane damages. Being deposed under oath, Trump admitted pocketing some of the money.

"It really beat up Mar-a-Lago very badly,” Trump claimed, though he only applied for building permits to do $3,000 worth of hurricane repairs.

With climate change reportedly increasing the intensity of storms, rising sea levels have some wondering if federal dollars should be used to rebuild Mar-a-Lago.

"A group of Democratic lawmakers introduced a bill in June that specifically aimed to block Trump properties from receiving any federal subsidy for flood insurance coverage," HuffPost noted. "The name of the bill ― the Prohibiting Aid for Recipients Ignoring Science, or Paris, Act ― riffs off the Paris climate accord, an agreement from which Trump withdrew that same month."

“It would be outrageous for somebody who is denying the reality of climate, who is undercutting our ability to minimize the effects, to then turn around and be a recipient of federal largess,” said PARIS Act sponsor Rep. Earl Blumenauer (D-OR).

Regardless of whether Trump admits the reality of Climate Change, his South Florida properties will remain a poor investment for taxpayers.

"In 30 years, the grounds of Mar-a-Lago could be under at least a foot of water for 210 days a year because of tidal flooding along the intracoastal water way, with the water rising past some of the cottages and bungalows," The Guardian reported. "Despite Trump’s pronouncements, there is strong evidence that he – personally – could pay the price for climate change in his property interests along the south Florida oceanfront and intracoastal waterway. In south Florida, sea level is projected to rise up to 34in by the middle of the century and as high as 81in by 2100, according to the national oceanic and atmospheric administration."