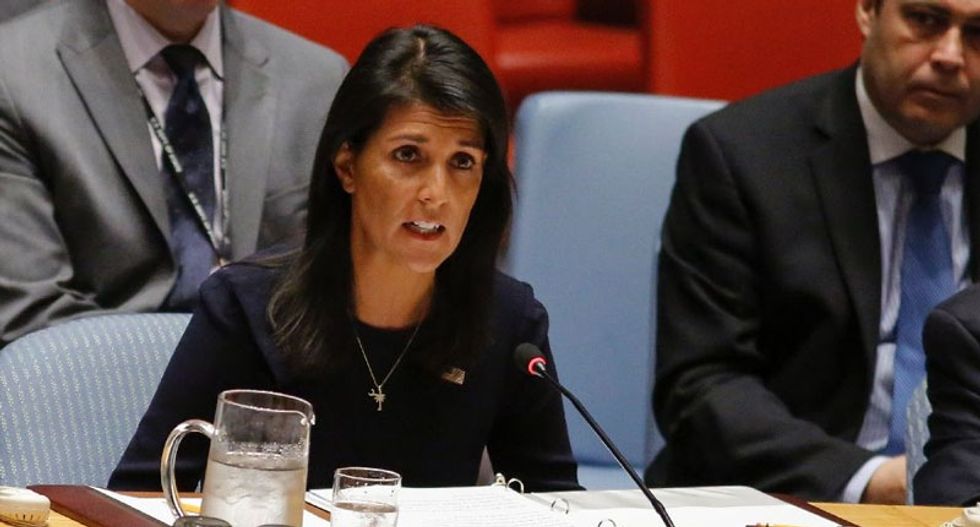 The United States on Monday launched a bid at the UN Security Council to quickly slap the "strongest possible measures" on North Korea in response to its sixth and most powerful nuclear test, but China and Russia said talks were needed to resolve the crisis.

US Ambassador Nikki Haley said Washington will present a new sanctions resolution to the council to be negotiated in the coming days, with a view of voting on it next Monday.

"Only the strongest sanctions will enable us to resolve this problem through diplomacy," Haley told an emergency council meeting.

The United States, Britain, France, Japan and South Korea requested the urgent meeting after North Korea on Sunday detonated what it described as a hydrogen bomb designed for a long-range missile.

Declaring that "enough is enough," Haley said incremental sanctions imposed since 2006 had not worked and accused North Korean leader Kim Jong-Un of "begging for war."

"War is never something the United States wants. We don't want it now. But our country's patience is not unlimited," she declared.

"North Korea has basically slapped everyone in the face in the international community that has asked them to stop."

Haley declared the "time for half measures is over," but did not spell out what measures Washington would support.

Diplomats have indicated an oil embargo would have a crippling effect on the North Korean economy.

South Korea's defense ministry said Pyongyang may be preparing another missile launch after two tests in July of intercontinental ballistic missiles (ICBMs) that apparently brought much of the US mainland into range.

A launch could involve an ICBM being fired into the Pacific Ocean, the ministry said.

At the UN, China's ambassador Liu Jieyi warned that "the situation on the peninsula is deteriorating constantly as we speak, falling into a vicious circle."

But he emphasized the need for dialogue and a diplomatic solution, saying Beijing would "never allow chaos and war on the peninsula."

He urged the parties to agree to a Chinese-Russian plan calling for the North to suspend its missile and nuclear tests and the United States and South Korea to suspend joint military exercises.

Haley rejected the proposal as "insulting."

"When a rogue regime has a nuclear weapon and an ICBM pointed at you, you do not take steps to lower your guard. No one would do that. We certainly won't," she declared.

Russia said it would study the new US proposals for sanctions, but again stressed those measures alone would not resolve the crisis.

"This is not the way to get parties to the table to seek a political solution," said Russian Ambassador Vassily Nebenzia.

The council has imposed seven sets of sanctions on North Korea since it first tested a nuclear device in 2006, but Pyongyang has repeatedly found ways to circumvent the measures.

The most recent resolutions, however, have significantly toughened the sanctions, targeting key exports sectors such as coal that are a source of hard currency for North Korean leader Kim Jong-Un's regime.

Adding to already sharp tensions, the United States warned Sunday that it could launch a "massive military response" to any threats from North Korea and said it might cut off all trade with any country doing business with North Korea. That could have major reverberations: China is the largest trading partner of both the North and the United States.

US Defense Secretary Jim Mattis issued an extraordinarily tough-sounding warning to the North, saying any new aggression against the US or its allies could lead to Pyongyang's "total annihilation."

Many experts say talks may be the only way to address the issue.

"The Americans need to open a direct channel at a high level with the North Koreans," John Delury of Yonsei University in Seoul told AFP. "That's the missing piece to all of this."

US President Donald Trump and South Korea's leader Moon Jae-In spoke on the phone Monday and agreed to remove limits on the payload of the South's missiles, Seoul's presidential office said.

Seoul was previously restricted to a maximum warhead weight of 1100 pounds (500 kilograms) on its ballistic missiles, according to a bilateral agreement with the United States signed in 2001.

South Korean defense ministry officials estimated the strength of Sunday's blast at 50 kilotons -- five times the strength of any previous detonation by the North -- but did not confirm whether it was a hydrogen bomb.

But Defense Minister Song Young-Moo said Seoul believed Pyongyang had succeeded in miniaturizing its nuclear weapons to fit into an ICBM.

On Sunday US monitors measured a powerful 6.3-magnitude earthquake near the North's main testing site.

The North hailed the test as "a perfect success."

Hours before the test, the North released images of Kim Jong-Un inspecting a device it called a "thermonuclear weapon with super explosive power" entirely made "by our own efforts and technology."

The respected 38 North website urged caution, saying it was likely the item pictured was "only a model mock-up."

The North says it needs nuclear weapons to defend itself against the threat of invasion, and analysts say it is seeking to strengthen its hand for any future negotiations with Washington.

In September Mayor McGee signed a proclamation promoting Constitution Week, celebrating the 234th anniversary of the drafting of the U.S. Constitution.

Donald Trump painted a bleak picture of America while calling into a podcast hosted by former Fox Business personality Lou Dobbs on Wednesday.

Trump spent much of the interview complaining about the 2020 election, pushing debunked conspiracy theories much as Trump and Dobbs did with the birtherism smear against Barack Obama a decade earlier. The two also discussed the economy.

'Every indication' Putin plans force by mid-February: US

The United States believes that Russian President Vladimir Putin remains poised to use force against Ukraine by mid-February despite a pressure campaign to stop him, a top diplomat said Wednesday.

"I have no idea whether he's made the ultimate decision, but we certainly see every indication that he is going to use military force sometime perhaps (between) now and the middle of February," Deputy Secretary of State Wendy Sherman told a forum.